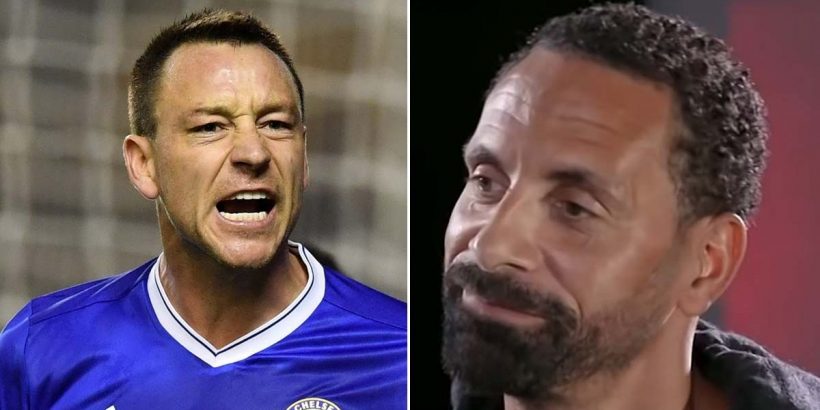 John Terry has hit back after he was once again ranked below Rio Ferdinand in the argument of the best Premier League defender.

The Chelsea legend ignited a war of words with Ferdinand this week after the Manchester United icon, who named himself as the greatest of all-time, placed him fifth in his ranking. The topic was discussed on talkSPORT on Saturday (May 29) with pundit Carlton Palmer also claiming Terry isn't better.

He said: "John Terry was a very, very good defender. His argument would be he's won lots of trophies. He has, you can't argue with that debate. We're talking about who is the best defender.

"There'd be an argument that the two players he played with, [Marcel] Desailly and [Ricardo] Carvalho, were better than him. But I wouldn't argue with him going in the top five.

"He's certainly in the top defenders in the country but if you look at the players who have played, you've got Sol Campbell, who I've played with. You've got Tony Adams, you've got Ledley King, you've got Vincent Kompany, you've got Jamie Carragher, you've got Martin Keown.

"I know people would argue John Terry is a better central defender than them. He gets in the top five but he isn't better than Rio for sure."

Who would make your top five Prem defenders of all-time? Let us know in the comments section.

It didn't take long for Terry to issue a response after the clip was posted on Twitter. He wrote: "Please repost Carlton Palmer's video saying 'I remember back in 1991 we played against Chelsea and the team talk was to target John Terry', I was 11 and at School, and your still getting him on your show."

Back in 2019 Palmer claimed during a TV appearance that he'd played Terry in the League Cup in 1991 – at which point Terry would only have been aged 11.

After a fan replied "someone's sensitive" and a gif of his penalty miss in the 2008 Champions League final, Terry added: "You, we the listeners deserve better than this, get Carra or Neville, Campbell, King or at least players who played at the very top."

Terry and Ferdinand's spat saw them argue on social media earlier this week, with both men accusing the other of having a "fragile ego", while allegations of racism made by Ferdinand's younger brother Anton against Terry, for which he was found not guilty in court, were brought up too.