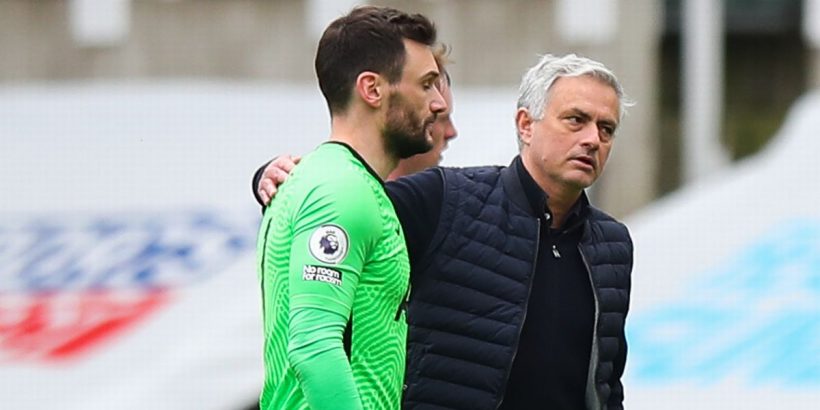 Newly appointed Roma manager Jose Mourinho will reportedly look to previous employers Tottenham for transfer recruits this summer, with goalkeeper Hugo Lloris near the top of his wish-list.

Mourinho, 58, has replaced Paulo Fonseca at the Stadio Olimpico after he was sacked by Spurs in April, but that won’t be the last the north Londoners hear from ‘The Special One’.

The Giallorossi are in the hunt for an upgrade between the posts as 37-year-old Antonio Mirante prepares to leave the club when his contract expires this month.

Sweden’s Robin Olsen will return from his loan at Everton, though it’s unclear whether he’ll be kept in Rome to offer competition to current No. 1 Pau Lopez.

Lloris will soon enter the final year of his contract at the Tottenham Hotspur Stadium, and the upcoming 2021/22 campaign will be his 10th in England’s capital.

The Spurs stopper—who is also set to captain France into Euro 2020 this month—isn’t the only north London-based target Mourinho has been linked with since taking the reins at Roma.

Do you think Mourinho should target a Lloris reunion at Roma? Let us know in the comments section.

Arsenal anchor Granit Xhaka is believed to be among his priorities after moving back to Italy, where he won back-to-back Serie A titles and a Champions League crown with Inter Milan (2009/10).

Lloris could become the latest of Mourinho’s former Premier League charges to link back up with the manager, with former Manchester United stars Chris Smalling and Henrikh Mkhitaryan also reuniting in Rome.

Mkhitaryan struggled for prominence under Mourinho during their time at Old Trafford and said of his old boss in March: "Yes, I could say yes [that Mourinho is difficult to please].

"He’s a winner by nature. He wants you to win and you do what he asks you.

"It’s difficult for anyone. There have been differences and conflicts, but they have not had a strong impact on good work and the three trophies won."