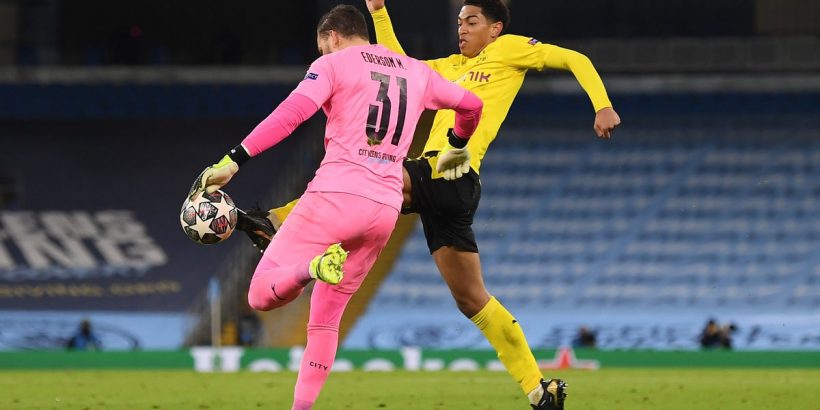 Borussia Dortmund midfielder Jude Bellingham has said he couldn’t understand why his goal in the 2-1 defeat to Manchester City in the Champions League on Tuesday was disallowed, adding that referee Ovidiu Hategan’s decision to blow for a foul was “frustrating”.

Bellingham thought he had won the ball from Ederson on the edge of the box, leading to an open goal, when the referee blew for a foul on the Manchester City goalkeeper before then booking the England international for his challenge.

Replays showed that the 17-year-old had got his foot to the ball before Ederson, who then kicked Bellingham’s foot and fell to the ground, but Hategan’s decision was unable to be reviewed by the VAR because the Romanian official had already awarded the foul and halted play.

Watching from home, the injured Borussia Dortmund and England winger Jadon Sancho tweeted: “This Ref needs checking!”, and speaking to BT Sport after the match, Bellingham said the goal should have stood.

“I definitely think I won the ball fairly,” he said.

“It’s a bit frustrating in a time when they’ve got so many cameras watching the game that they [don’t] wait for me to put it in the net and then check it. But it’s football and it’s life and you’ve got to get on with it really.”

“All I got told was that I had been booked and it was a free kick for them, I think they should have checked it. But apparently I had my studs up and caught the goalie and therefore it was a foul.”

Dortmund had fallen behind thanks to Kevin De Bruyne’s 16th minute opener, with Bellingham’s disallowed goal coming later in the first half.

The German side equalised late on through Marco Reus before Phil Foden’s 90th-minute winner earned City a one-goal lead heading into the quarter-final second leg next week.

“I think we frustrated them when they had the ball, at times they found it hard to break us down,” Bellingham said.

“We used the ball quite efficiently and for our goal I think it was a brilliant bit of play [from Erling Haaland] to put Marco in, and it’s a great finish.

“It’s still disappointing to concede so late but we will use that away goal in the second leg and will see what we can do.

“I think we need the same sort of plan in terms of without the ball, but I think with the ball we’ve got to be a bit more efficient, create a bit more and take the game to them. At home we’ll be looking to do that.”