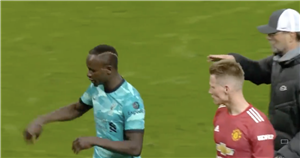 Liverpool manager Jurgen Klopp has played down Sadio Mane's snubbing of his handshake after their match against Manchester United.

Klopp said it happened because he started Diogo Jota ahead of the Senegalese forward and the change was a late one ahead of their Premier League match.

The Reds defeated United 4-2, the first victory for Klopp at Old Trafford, to move to fifth in the league and push the club closer to qualifying for the Champions League.

But after the match Mane was clearly still upset he hadn't started the fixture.

Klopp told reporters: “If somebody shows me five million times respect and one time not, what is then more important?”

“The world is in a situation when you make this one time bigger than necessary. That’s unfortunately the case.

“If you had seen me as a player what I did out of emotion it was insane – and I’m a completely normal guy but it happened to me.

“We will talk about it, then it will be sorted. That’s all.”

And Klopp also said he wouldn't speak negatively of Mane as the incident was sparked from the emotion of the game.

He added: “I cannot make a bigger story of it as it is. Football is an emotional game and everyone expects from us to control our emotions always but it doesn’t work out always, that’s the case.

“We had so far no real chance to talk about it but we will and there will be nothing left. Everything will be fine.

“Do you want these things to happen? No. But it’s not the first time in my life and I’m afraid to say it won’t be the last time.

“Even when I speak about that already I can see the headlines but that’s not the case. I am completely relaxed about that.”

Liverpool will next play West Brom on Sunday and will try to close the gap between themselves and fourth placed Chelsea with just a week of the season to go.