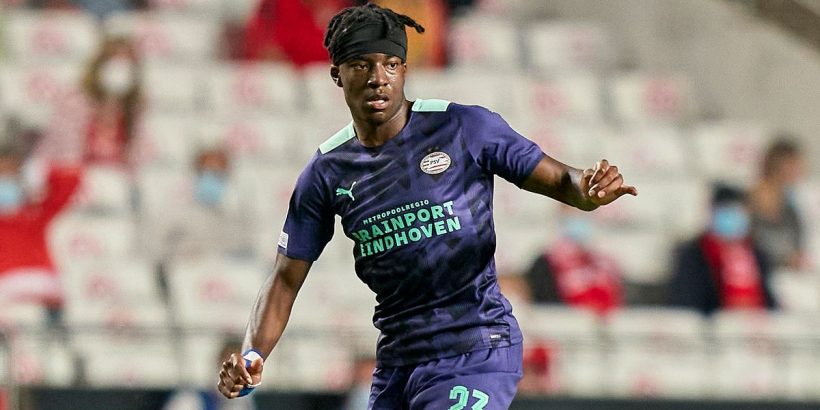 Juventus and Bayern Munich have sent scouts to watch a young English talent at PSV, who has also attracted Tottenham.

Noni Madueke, 19, has started his 2021/22 campaign with the Dutch side in stunning style, scoring five goals in seven games.

It is his second season with the senior squad, having broken through last year to score nine goals in 32 appearances – looking set already to beat that form in front of goal.

And The Mail have reported that it has attracted the attention of some of Europe’s biggest clubs.

The England U21 winger featured in PSV’s Champions League play-off first leg against Benfica, which they lost 2-1.

While the Portuguese crowd enjoyed the game, a throng of scouts were at the Estadio da Luz to watch the Englishman in action.

Juventus had representatives at the game while Bayern expressed their interest too.

Both have seen speculation emerge about top-scoring talents Cristiano Ronaldo and Robert Lewandowski this summer, which has since been quelled.

They joined representatives from Tottenham, Leicester and Manchester United to watch Madueke.

Where do you think Noni Madueke should play in the 2021/22 season? Let us know in the comments section.

An offer from Spurs would see the 19-year-old move to a familiar sight, having worked up the ranks in their academy before heading to PSV in 2018.

And the Red Devils are being persistent, with the forward having reportedly rejected a move to Old Trafford previously.

Among the other clubs sending scouts to the Benfica clash were fellow Serie A teams Roma and Atalanta.

2021 has marked a breakthrough year for Madueke, earning a first call-up to the England U21 squad for their European Championship campaign.

And he was given 18 minutes on the right wing in a 2-0 defeat to eventual runners up Portugal.

When he arrived at PSV, Madueke operated primarily as a No.10, with chiefs noting how he mastered the ball in that position during the indoor Sonnenland Cup in 2017, after which he was named player of the tournament.

But after linking up with Ruud van Nistelrooy, who works as an Under-19 coach for the Dutch club, he has since been remoulded into a more clinical attacker out wide.