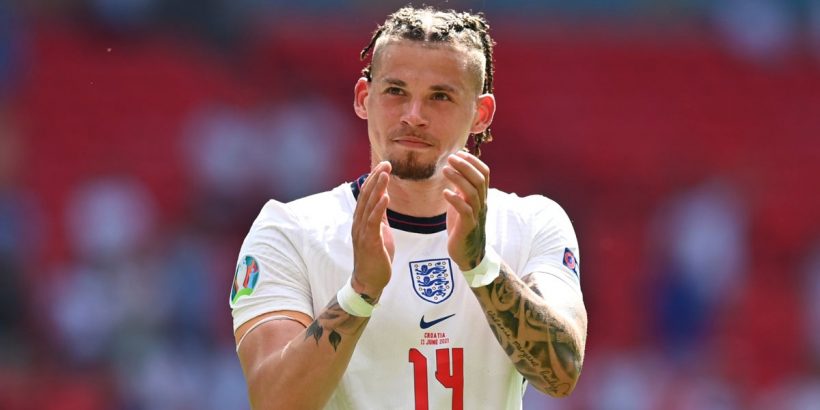 Kalvin Phillips admits he had a day of worrying he would mess up on his tournament debut for England – only to put in a man of the match display to help see off Croatia in their Euro 2020 opener.

The 25-year-old put in a standout performance as the Three Lions beat their Group D rivals 1-0 at Wembley on Sunday.

Phillips laid on the only goal of the game for Raheem Sterling to cap off a fine individual display which earned him plenty of plaudits.

While UEFA handed their star of the match award to Sterling, Phillips would claim the official England man of the match gong.

But he conceded it could have been different, having been concerned of stage fright when he was first made aware he would be starting.

“We only found out (the team) the day before,” he told the Lion’s Den.

“We did some set-piece meetings and (boss) Gareth (Southgate) named the team. At first when you hear your name your heart is in your mouth.

“I had a full day of thinking ‘oh no, am I going to mess it up?’ but then you get to grips with it and be ready for anything that comes.

“When you see you are lining up against (Luka) Modric and (Mateo) Kovacic you know it doesn’t get any tougher than that.”

Phillips also had more reasons to celebrate as his eye-catching display came in front of his mother, who had toasted her birthday 24 hours earlier – and thought he may have even been able to mark the occasion with his first England goal.

“You cant really put it into words. At the time when I was running forward with the ball, I can’t really remember doing it.

“I remember Walks (Kyle Walker) passing me the ball and then everything else after that was a blur and as soon as the ball hit the back of the net the crowd went mental.

“It was my mum’s birthday the day before and when we celebrated she was literally right at the front on that side so it felt like we celebrated with her as well. “It was weird. I had a mad feeling before the game that I was maybe going to score.

“I told Ben White I had that feeling and I came close to scoring but if I wasn’t going to score, at least I set one up.

“Whenever I get a chance to be on the ball, I just think ‘don’t give it away’.

“Given I had a 94 per cent pass accuracy, my team-mates helped me out a lot and that is how it happened.”