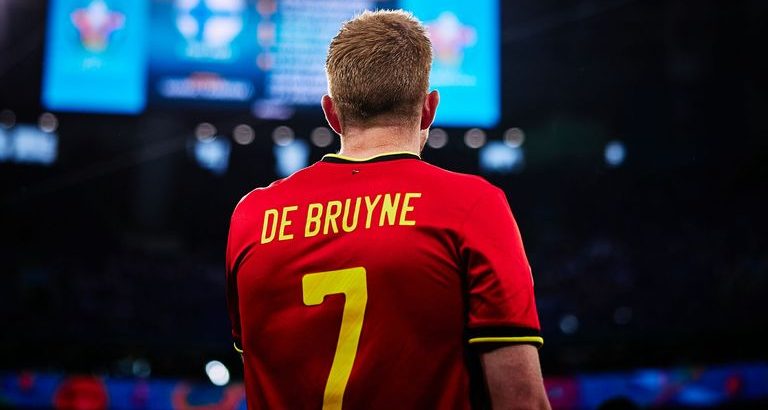 Kevin De Bruyne scored the winning goal for Belgium against Denmark but it was the assist for the equaliser that received more attention. His first touch left two defenders on the deck. His second found Thorgan Hazard for the tap-in. It was a pass few had spotted.

Over in Norway, the television commentators began to wonder how it was that De Bruyne could have noticed his colleague when he had appeared to be concentrating on the ball. Soon, they were speculating that the midfielder must have eyes in the back of his head.

Geir Jordet, listening to the commentary at home, could only smile. He knew the secret. De Bruyne has mastered the art of scanning, that little head movement where a player temporarily looks away from the ball, gathering information in preparation to receive it.

“I love that example so much,” Jordet tells Sky Sports. “It was a fantastic pass in the end but they were saying that he had picked the pass without looking. I knew they were wrong even when I was watching it live because I had seen him scan in the build-up to the goal.”

Jordet is not just an expert on the subject, he was the first to really study it. A professor at the Norwegian School of Sports Sciences, he did his thesis and PhD on the role of vision, perception and anticipation in elite-level performance. For him, this is a 23-year journey.

“I started studying this in 1998. All this work has been accumulated, we have done so much work on it, but the world did not really know about it until we started to publish our research in scientific journals three to four years ago. Recently, it has become more popular.”

It was around a decade ago now that Jordet and his team of students in Holland got hold of the Sky Sports Player Cam footage. They tracked situations involving 118 Premier League players and compared the frequency of their scanning to Dutch amateur players.

“That was one of the first big studies that we did and we discovered that scanning does differentiate between players,” Jordet explains. “We found that Premier League players were significantly better at this than Dutch amateur players, as you might expect.

Lampard is an interesting example because when the findings of Jordet’s study were put to him, he claimed to be unaware that he was even doing it. Only when pressed did he recall that his father would repeat one word at him as a young player. Pictures. Pictures. Pictures.

“What I have come across a lot is that many of the players who are considered to be really good at it share the same story. They were told about it or discovered that it was important at a really early age and when you start early you have an advantage on others.

“I remember an interview with Glenn Hoddle and a discovery that he had as a young player watching Jimmy Greaves. He wasn’t looking at the ball, Hoddle would say, he kept looking over his shoulder. He realised that it was important. That is a very typical story.

“Clearly, this was something that Lampard was exposed to at a young age but then it became habit. Like all skills, it becomes automatic after a while and you just do it. That is the case with many of these players. Some of them do this and they are not thinking about it.

“Scanning does not tell us everything because obviously it is so complex, but it gives us a little bit of a window into the vision awareness process that these players have. It is a glimpse of the extent to which these players are aware of their surroundings.” Jordet sees this trait in some of the best young players in the world. Working this out quickly might just separate them from the rest. “Look at Jude Bellingham. Look at Phil Foden, who is excellent at this. Kylian Mbappe has fantastic skills at scanning. Erling Haaland is great at it.

“Mbappe and Haaland are exceptionally impressive because you typically don’t see forwards scan as much as those two. The studies I have done in the Premier League – so these are top forwards – show that they are still a little bit behind those two guys.”

There is more to this than the mere frequency of the scans but the precise timing of them is important too. One player still stands out for Jordet, even teaching the professor himself a thing or two about the nuance and detail that is involved in the science of scanning.

“The first player who really showed me how it is done was Cristiano Ronaldo. I was watching him live in a Champions League game in Copenhagen some years ago and it struck me so hard that his timing was like a clock, like a metronome that keeps the rhythm.

“His teammate would touch the ball and immediately he would look away. Then he would look back at the next touch. You touch it and he looks away. Touch, look away. He was the first one who made me realise how complex this is. It is very hard to train that.” That is the nub of the issue for those hoping to tap into Jordet’s knowledge. He is involved in coach education workshops, heavily involved with the development of Norwegian football and having conversations with coaches around the world. But teaching this is tricky.

“If you start this at a young age you will definitely have an edge. I have done training studies where we see that even with adults at a high level, it is quite easy to get a pretty good impact quickly. But you need to work more on it for it to benefit your performance.

“What I mean by that is that it is quite easy to get players to double their scanning frequency. But it takes more time to actually take in that information, not just look but perceive what is happening, and ultimately to use it to guide your actions.”

With that in mind, he has helped develop a virtual reality tool, Be Your Best. “It is something that you can more easily control in a virtual reality environment. With this tool, you get feedback on that particular aspect of scanning, such as the frequency or the timing.”

That could transform coaching but this relatively newfound appreciation of the importance of scanning could also be the catalyst for dramatic changes in the way that defenders are scouted in the coming years. That has long been a problem for recruitment staff.

After years of focusing on the team in possession, Jordet expects attention to shift to the scanning – or lack of it – by those players on the team that is out of possession. The findings could shed some light on why the best defenders in the world are better than the rest.

“I suspect that there are many, many more mistakes that are made at the highest level of the game as a result of insufficient scanning in the defensive phase of the game than we realise. When the other team has the ball, players make mistakes all the time.

“Emil Forsberg scored a goal against Poland that was a classic case of the defence not scanning, not collecting information about his position throughout that whole attack leading up to the goal. That is something you see quite a lot. It is the next frontier.”

In the meantime, defenders will have to continue to deal with De Bruyne and those players who always seem to be one step ahead without even looking. 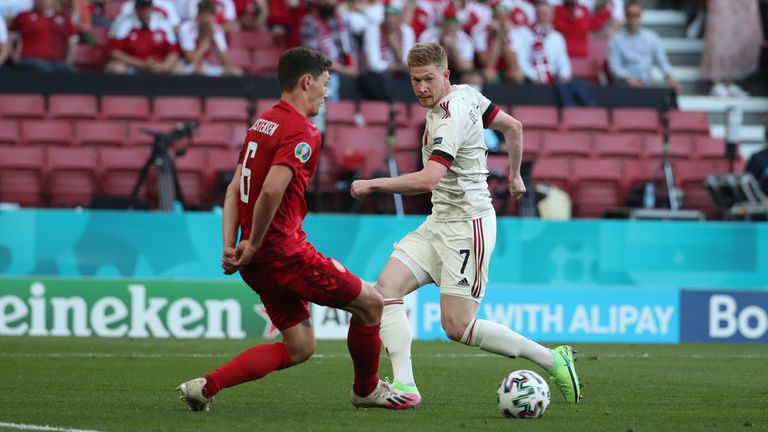 As for Jordet, he is enjoying the Euros even in Norway’s absence. But is he ever able to just watch the television and allow his eyes to follow the ball?

“But to see these things what you have to do is look at the player way in advance of them getting the ball. If you don’t do that then you are going to miss out on things.”

He was pleased to have spotted De Bruyne’s swift scan against Denmark in real time. It was only when he watched the slow-motion footage the next morning that he realised the truth.

“Where I was wrong is that I thought he had scanned once,” adds Jordet.

“When I looked back at the whole attack, only looking at him, I found out that he had scanned five times. There were four additional scans that I had missed when watching it live because I was watching it as a regular person. This is why people are missing it.”