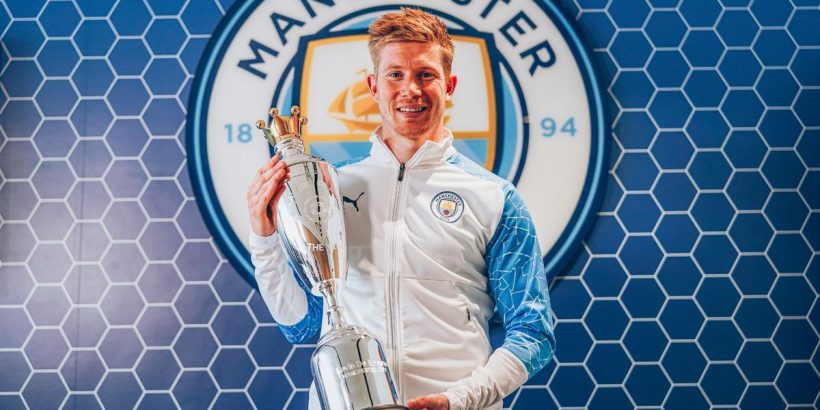 Kevin De Bruyne has become just the second player in history to win back-to-back PFA 'Player of the Year' awards.

The Belgium and Manchester City midfielder follows in the footsteps of Cristiano Ronaldo in landing the gong in successive seasons.

De Bruyne's City team-mate Phil Foden made it a clean sweep for Pep Guardiola's men after winning the PFA 'Young Player of the Year' award following an outstanding campaign for club and country.

De Bruyne admitted winning the award again was special to him because it was voted for by his fellow professionals.

He said: "The fact that players chose me for this award means that I've done really well. You want to win all the trophies with the team, and this is probably the most important one as an individual trophy in the league.

"To be voted by your competitors, by players you compete with every game, to choose you, that says a lot.

"They're the people in my view who know most about the game. When you have these things, you can show your kids and say 'Look, this is what daddy did when he was younger.'"

Foden, who was also nominated for the senior award, said: "I'm really honoured. There have been some great players in the past who have won it, and I feel really lucky because there have been so many great young talents this year.

Is Kevin De Bruyne the right winner for the PFA Player of the Year award? Let us know in the comments section.

"It's a special moment. I'd like to thank my parents, all of the coaches and the players as well, because without them creating chances for me, I wouldn't score and maybe wouldn't win the awards. Without them it wouldn't have been possible."

Outgoing PFA chief executive Gordon Taylor received the 2021 PFA Merit Award for his services to the game and was presented it by Sir Alex Ferguson.