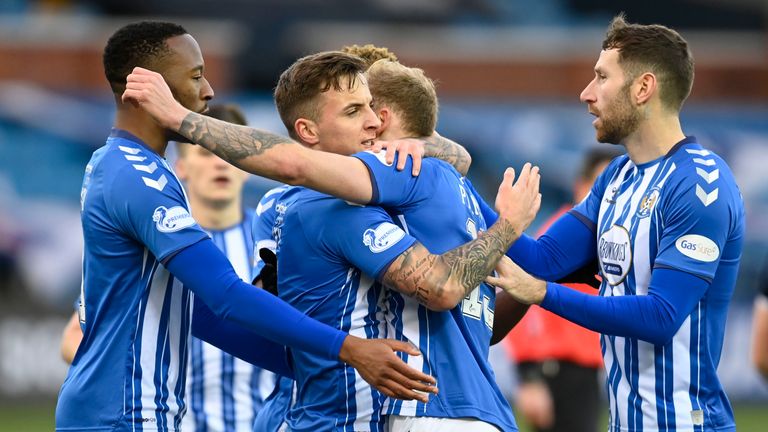 Goals from Eamonn Brophy, Nicke Kabamba and Chris Burke handed Killie a vital win with a performance that was testament to the resilience that Alex Dyer has instilled in his squad.

Ross County failed to capitalise on their advantage throughout and they remain without a win in their last seven Premiership games.

It was a nightmare start for Kilmarnock as Findlay was shown a straight red by referee Colin Steven after nine minutes.

The 25-year-old was completely unaware of Ross Stewart who nipped the ball from him and, as he attempted to rectify his mistake, he caught the striker and was sent off.

The visitors had every right to feel aggravated but they channelled that frustration into taking the lead in the 14th minute. Mitch Pinnock delivered a stunning left-footed cross and the diminutive Brophy nipped between static defenders to head home.

Brophy has struggled to recapture the form that earned him a Scotland call-up last year but he almost doubled Killie’s advantage after 16 minutes, forcing Ross Doohan into a smart save.

The Staggies grabbed a deserved equaliser on 43 minutes through Tom Grivosti. County worked a short corner to Stephen Kelly, who curled a pinpoint cross from the angle of the box for Grivosti to glance a header home.

Killie made the better start to the second half and Kirk Broadfoot’s powerful shot forced Doohan to palm behind after the defender embarked on a marauding run after 49 minutes.

Kilmarnock continued to push forward and were rewarded when referee Steven pointed to the spot in the 68th minute. Coll Donaldson was adjudged to have fouled Pinnock and Kabamba confidently slotted the penalty past Doohan for his fifth goal of the season.

The visitors applied constant pressure in the final 10 minutes and Brandon Haunstrup made a brilliant block to deny substitute Jermaine Hylton.

Charles Lakin went agonisingly close with a thunderous effort before Danny Rogers produced a brilliant flying save to deny Josh Reid after 87 minutes.

With County committing men forward in search of an equaliser, Kilmarnock caught them on the break and substitute Burke fired emphatically home to add gloss to a stunning win.

Kilmarnock are not in action again until December 5, when they are away to Hamilton; kick-off 3pm. Ross County travel to face Celtic in the Scottish League Cup next Sunday; kick-off 2pm.

The champions then host Ross County in the Scottish League Cup next Sunday; kick-off 2pm.

Foreman warns Tyson it is 'temporary insanity' to be fighting again

‘There is no sole genius’: The unsung heroes of Liverpool’s data revolution