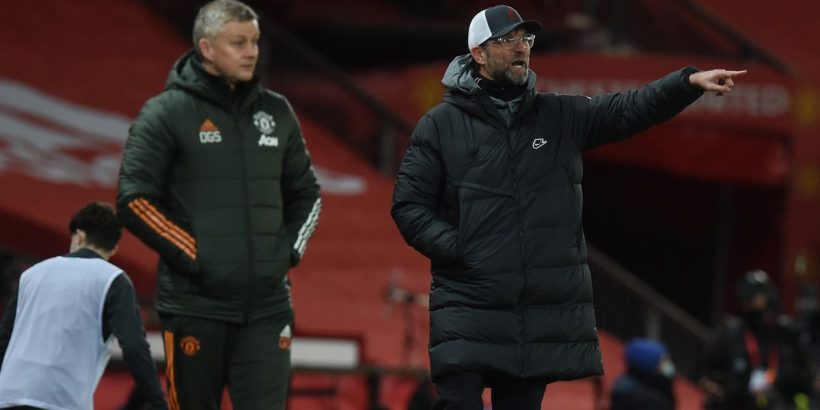 Jurgen Klopp believes Liverpool will have nobody but themselves to blame if they fail to qualify for the Champions League.

And the Kop boss admits he'd have done exactly the same as Manchester United boss Ole Gunnar Solskjaer by making 10 changes against Leicester.

Solskjaer has come under fire for resting his main men for Tuesday's defeat by the Foxes which came just 48 hours after they beat Aston Villa.

United now host Liverpool tonight in a rearranged fixture after the postponement because of fan protests last week.

It has led to calls for the Old Trafford club to be punished for making so many changes in a game which Leicester won to give them a real boost in their hopes of finishing in the top four.

But Klopp said: “It was the line up I expected. Not exactly what I expected, but I knew he had to make these changes.

“It is. But it is not the fault of Ole Gunnar Solskjaer and the players.

“We are late in the season, all the players played a lot of games.

“United went to the Europa League final so that means an awful lot of games and now you get Sunday, Tuesday, Thursday – that is not possible.”

Liverpool head into tonight's clash with United looking to close the gap between them and fourth-placed Chelsea.

While Klopp felt the Premier League could have moved the fixtures in a more favourable way for the Reds and United, he insists nobody else is to blame if they don't reach Europe.

He said: “The explanation from the Premier League was that no other team should suffer because of the things that happened in Manchester.

“Let me say it like this – that didn’t work out pretty well.

“But if we don’t qualify for the Champions League it is not the fault of Ole Gunnar Solskjaer and his team selection or the Premier League.

“It is our fault, but in this specific case I think things could have been done differently definitely.

“But we get more and more used to things that rarely go in your favour or direction. It is just accepted as how it is.”