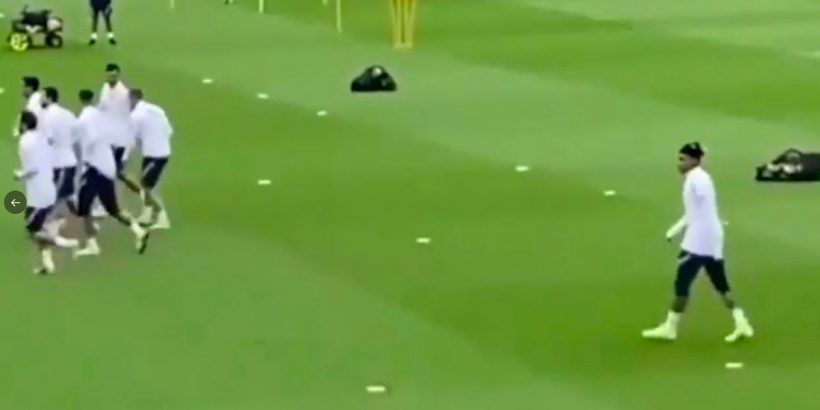 Kylian Mbappe has been pictured appearing to be alone in PSG training following increased speculation that he will depart for Real Madrid.

Mbappe looks to have been snubbed in the images that show him walking onto the pitch alone, some distance behind the rest of Mauricio Pochettino's side.

The World Cup winner could be seen very isolated from his colleagues who were said to be laughing and joking together.

Mbappe has just one year remaining on the contract he signed with the French side when he made the move from Monaco in 2018.

And the 22-year-old is refusing to put pen to paper on a new deal at the Parc des Prince, meaning he will be able to negotiate with clubs from January over a move away on a free.

Right now it looks like he'll be taking the short flight from Paris to Madrid with the Spanish side in pole position for his signature. Recents reports have suggested Mbappe wants to meet PSG president Nasser Al-Khelaifi to ask him to negotiate a move to Real, putting pay to Liverpool's hopes of signing the megastar.

These recent developments have frustrated not only the club's officials, but also their fans, who furiously booed him ahead of their first Ligue 1 home game of the season last weekend.

More recently the France international was notable in his absence from teammate Ander Herrera's birthday Instagram post, which featured several of PSG's squad.

Has Mbappe been treated harshly in the last week? Let us know your thoughts in the comments section.

Pochettino has insisted he is happy with the club despite the strong indications that he wants a move away next summer, if not this year.

He said: "I think Mbappe is in very good spirits. He is really motivated to have a good season.

It seems the PSG squad are not on the same page as their manager, though.