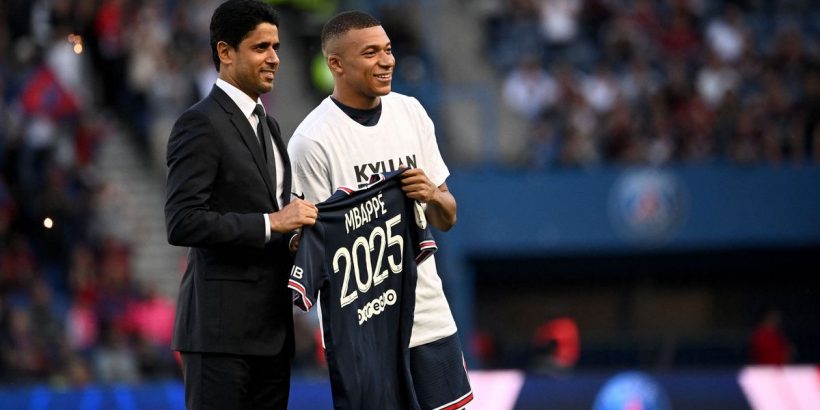 La Liga have slammed "scandalous" Paris Saint-Germain as they confirmed they would make an official complaint to UEFA over Kylian Mbappe's new contract at the club.

Mbappe confirmed ahead of PSG's final Ligue 1 game of the season that he had penned a deal that would keep him at the Parc des Princes until 2025. The news left both La Liga and Real Madrid red-faced, with many having expected the attacker to move to the Bernabeu this summer.

And in response, the Spanish top-flight have released an extraordinary statement in which they confirmed they would be filing a complaint against the new deal. La Liga blasted the PSG hierarchy, claiming they have flagrantly breached financial fair play rules.

"Faced with Kylian Mbappé's possible announcement of remaining at Paris Saint-Germain, LaLiga wants to state that this type of agreement threatens the economic sustainability of European football, putting hundreds of thousands of jobs and sporting integrity at risk in the medium term, not only from European competitions, but also from our domestic leagues," the statement read.

"It is scandalous that a club like PSG, which last season lost more than 220 million euros, after having accumulated losses of 700 million euros in recent seasons (even declaring income from sponsorships of a very dubious amount) with a cost of sports staff around 650 million for this 21/22 season, can face an agreement of these characteristics while those clubs that could accept the arrival of the player without seeing their wage bill compromised, are left without being able to sign him.

"For all of the above, LaLiga is going to file a complaint against PSG before UEFA, administrative and tax authorities in France and before the competent bodies of the European Union, to continue defending the economic ecosystem of European football and its sustainability.

Is Kylian Mbappe's new PSG contract a 'danger' to European football? Let us know your thoughts in the comments section…

"On previous occasions, LaLiga has already made complaints against PSG for non-compliance with UEFA's financial fair play as a result of which UEFA harshly sanctioned PSG, although the CAS revoked them in a strange resolution."

La Liga also took aim at PSG president Nasser Al-Khelaifi, who became the president of the European Clubs Association last year. They branded the Qatari's actions as being 'dangerous' to the future of football itself.

"LaLiga and many European football institutions were hopeful that with the entry of the PSG president, Mr. Nasser Al-Khelaifi, into European football management bodies such as the former UEFA or the ECA Presidency, he would refrain from carrying out these practices knowing the serious damage they cause, but it has not been like that, quite the opposite," the statement continued.

"Being PSG with unacceptable salary masses, with large economic losses in previous seasons, it assumes an impossible investment in this situation, which undoubtedly implies non-compliance with the current economic control regulations not only of UEFA, but of French football itself.

"These behaviours denote even more that the state clubs do not respect or want to respect the rules of an economic sector as important as football, key to the sustainability of hundreds of thousands of jobs.

"This type of behaviour led by Nasser Al-Khelaifi, president of PSG, due to his status as a member of the former UEFA, president of the ECA, is a danger to European football at the same level as the Super League."