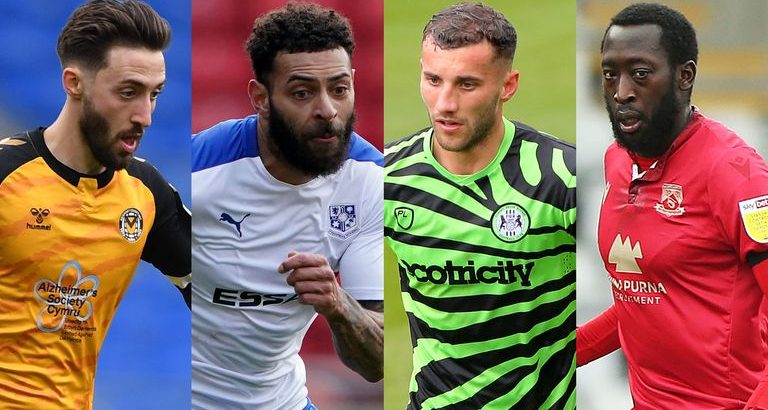 With the regular season now in the rear-view mirror, all that is left to decide is who will win the play-offs and join the trio in League One next season.

Ahead of next week’s semi-finals, we take a look at the contenders who are potentially just 180 minutes away from booking a date in the final at Wembley on Monday, May 31.

It has been another eye-catching season for the ever-innovative Forest Green Rovers, both on and off the pitch.

The Gloucestershire club made national headlines in September when Arsenal’s Hector Bellerin became the second-largest shareholder, struck a sponsorship deal with drinks manufacturer Innocent in October and, on Tuesday, begin their second play-off in three seasons after only being promoted to the EFL in 2017. 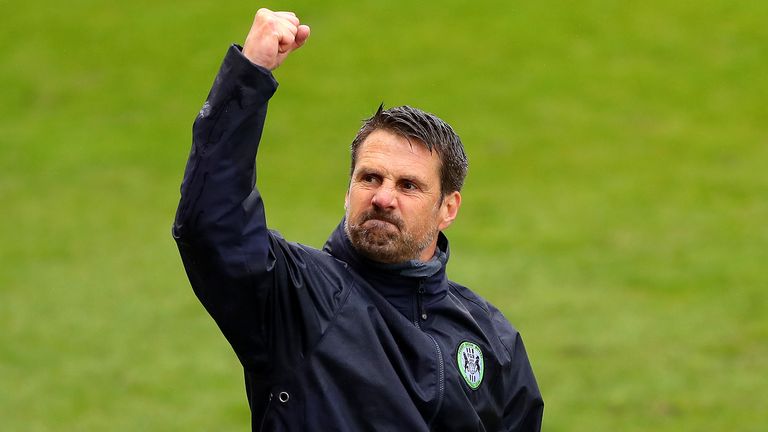 Though results were not always sparkling, from December all the way through to March, they occupied an automatic promotion spot. Then came a roadblock.

As almost every team up and down the country is aware, the nature of this – unique, condensed, challenging, one-of-a-kind, all of the above – season meant that was an inevitability, but it came at a decisive time for the club and sealed its fate for the remainder of the campaign.

The dismal run started with a 1-0 defeat to Cambridge on March 20, before a goalless draw away at Mansfield three days later and subsequent defeats to Bolton, Bradford, Salford and Walsall. To make matters worse, 16-goal frontman Jamille Matt was ruled out for the season after suffering a nasty hand injury in the Bolton loss.

A day Rovers lost to Walsall, Mark Cooper – whose contract was due to expire in May – was sacked after five years, with U18s coach Jimmy Ball installed as his interim replacement.

As the son of 1966 World Cup winner Alan Ball, he brought indisputable pedigree, though with no experience in senior management, the experiment could well have turned sour. That has been far from the case, however, and with three wins, two draws and just one defeat, it has been an impressive start.

Ball’s temporary role has been guaranteed by chairman Dale Vince until the end of the campaign, meaning he has the chance to go one better than his predecessor and take Forest Green to League One for the first time in their history.

Also in with a chance of a maiden third tier season are Morecambe, whose fourth-place finish this term was the joint-highest in the club’s 101-year history. 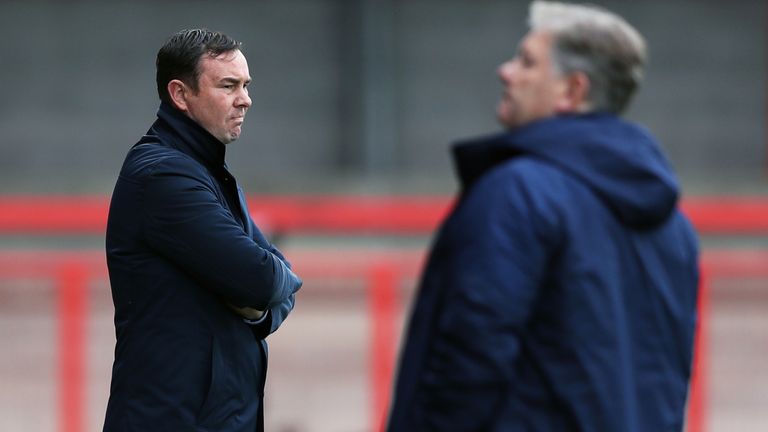 The last time the Shrimps reached that position was in 2010, when they were beaten by Dagenham & Redbridge in the play-off semi-final, and almost every year since has seen a battle to preserve their Football League status, with 18th-place their highest final position throughout the last five seasons.

It has been different under Derek Adams, who took over at the Mazuma Stadium in November 2019, when the club was rooted to the bottom of the table. “I took a risk coming here,” he told Sky Sports in January.

Having achieved his initial brief of keeping the club in League Two, the Scot set about moulding his team last summer, bringing in an experienced bunch, including Ben Pringle and Nathaniel Knight-Percival. When they won four of the first five league games of the season, it was evident what lay ahead was not a run-of-the-mill survival exercise.

A series of draws in November saw them briefly fall away into mid-table, but 15 goals from breakout star Carlos Mendes Gomes – once of Atletico Madrid and recently linked with Rangers – and another 13 from Cole Stockton made their position in the top seven a comfortable one. 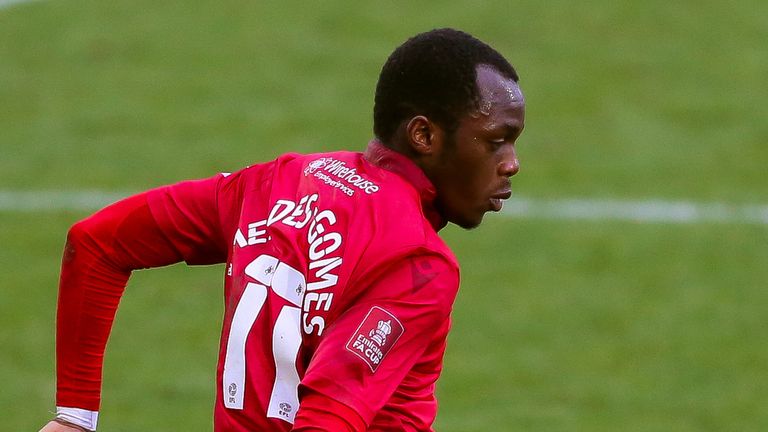 Four wins from five games meant they were even in with a late shot at automatic promotion on the final day, but despite their 2-0 win against Bradford, results elsewhere meant that it was not to be.

Under Adams, Morecambe have been scintillating at times this season. What remains to be seen is whether they can cap the transformation by making history.

Like Forest Green, this is also Newport’s second shot at the play-offs in three seasons, following their loss against Tranmere in the final in 2019.

But the season could well have had a different outcome had they kept up the early season form that first took them to the top of the league on October 3, with a 2-1 home win over Mansfield making it 10 points from the first 12 on offer. 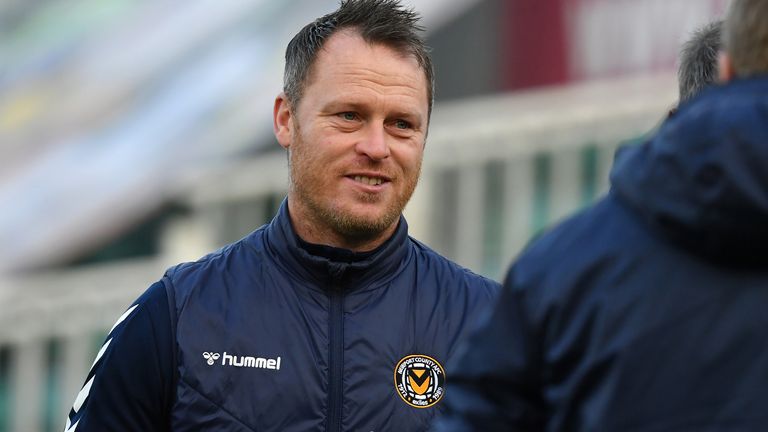 That then became eight wins from the first 10 games, meaning even when they started to drop points in November and December, Michael Flynn’s team still led the way at the summit. But a three-week break without a game after the 1-1 draw with Crawley on Boxing Day heralded a slump that would see them drop out of the automatic promotion places for good.

Over the course of the next 11 games, they would lose five games, draw four and win just two, momentarily slipping to eighth after a 1-0 defeat to Tranmere on March 2.

“At the minute it’s hard to deal with because there are games that we should have won but have lost,” said Flynn afterwards. “It’s frustrating. We want to go and win a couple of games in a row and the longer we leave it, the harder it’s going to get.” 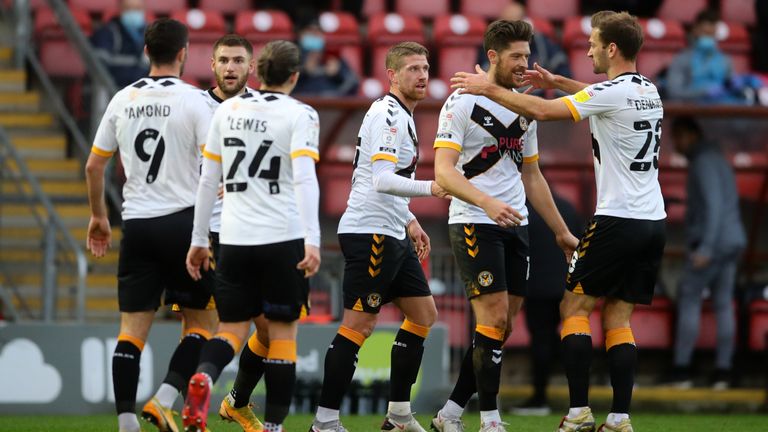 As if by magic, over the next week, they won three games in a row for the first time since October. But as quickly as they had emerged, top-three hopes were soon extinguished again by three straight defeats.

Cheltenham, Cambridge and Bolton would go on to succeed where County failed, but an undeniable positive going into the play-offs is their newfound defensive solidity; in the final nine games, they kept six clean sheets and conceded just three times.

It was a case of one step forward, two steps back for Tranmere last season, as the Covid-induced curtailment of the League One season last term came at a heavy price.

Having won the League Two play-offs in May 2019, their struggles with consistency saw them drop into the relegation places on New Year’s Day 2020. But after reinvigorating the squad with six new faces – including that of the experienced James Vaughan – Micky Mellon saw his side win three straight games from February 25 to March 10. It was not enough to lift them out of the bottom three, but the signs of a revival were there for all to see. 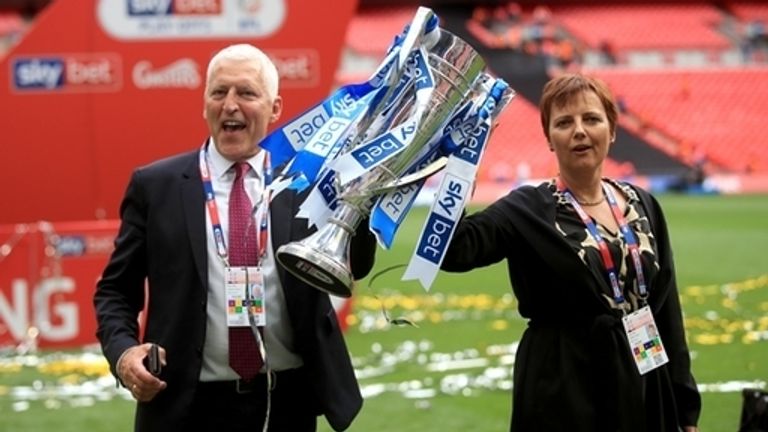 There was an anxious three-month wait to find out whether the third or fourth tiers of English football would recommence after the initial suspension on March 13 and, in a cruel twist of fate, when EFL clubs voted to end the campaign and finalise the table on a points-per-game basis, Tranmere were condemned to a League Two return by 0.06 of a point.

“We have been very clear that we regard the vote as unfair, unjust and an entirely unnecessary infliction of damage on our club when we are already grappling with the impact of a global pandemic,” said Rovers owner Mark Palios.

This season, they have been out to avenge that decision, though it has been far from straightforward.

Mellon departed Prenton Park to take over at Dundee United, with his assistant – former Tranmere defender Mike Jackson – stepping up to replace him, but he won just two of his first 10 games in charge, leaving the club hovering all too close to the relegation zone at the end of October. 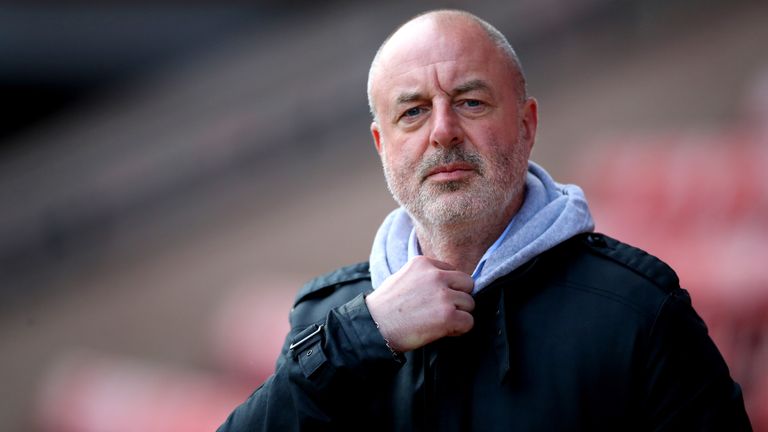 Two months after his appointment in late November, Keith Hill had guided his side into both the final of the Papa John’s Trophy – in which they were beaten 1-0 by Sunderland – and the play-off places, owing to eight wins in 11 games at the start of 2021.

Form stuttered over the last two months, though, and having pipped Salford to a play-off place by just two points after two wins from the last 11 games and a final day stalemate at home to Colchester, Hill was sacked on May 11.

For the second time this season, Ian Dawes and Andy Parkinson will take charge in the interim. This time, their task is to secure a return to a division Rovers feel they should never have left.