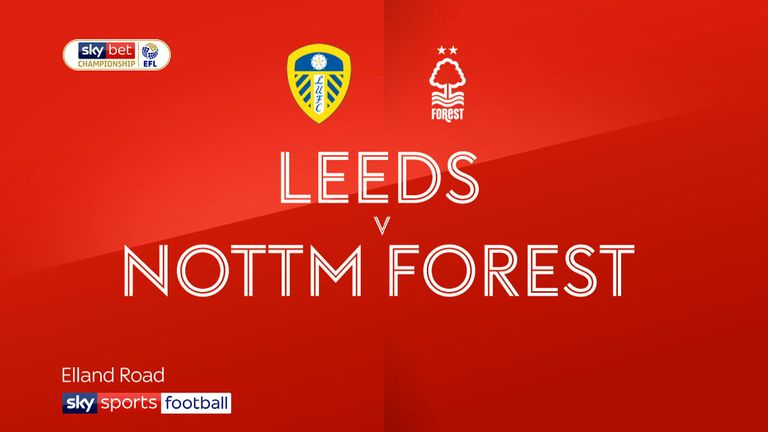 Kemar Roofe scored a controversial late equaliser as Leeds rescued a point from the jaws of defeat in a 1-1 draw with Nottingham Forest.

Forest took the lead against the run of play when Jack Robinson overpowered Stuart Dallas to head home his first goal for the club just 11 minutes in.

Leeds overwhelmingly dominated the possession from start to finish, yet lacked the attacking prowess they have become renowned for this season, rarely testing Costel Pantilimon in the Forest goal.

But with eight minutes to play, Roofe turned Mateusz Klich’s cross home at the far post with the aid of his right arm, meaning Leeds sit second in the Championship standings, while Aitor Karanka’s Forest remain two points outside the play-off positions.

Having soaked up the early pressure from the hosts, luck played a part in Forest’s goal as Ezgjan Alioski’s attempted clearance ricocheted off Adam Forshaw and behind for a corner.

Joe Lolley delivered the needlessly-conceded set-piece from the right and Robinson held Dallas at bay, allowing him to power a header past Bailey Peacock-Farrell.

Leeds rallied and forced Pantilimon into a range of saves, notably his reflex save to push Pablo Hernandez’s shot behind, but the hosts were dealt a blow when they lost Luke Ayling to a knee injury after 25 minutes.

Marcelo Bielsa’s men had only won one of their last 39 Championship games when conceding first and their lack of both potency and end product continued into the second half.

Marcelo Bielsa made three alterations from the side that beat Ipswich last time out as Pontus Jansson returned to the starting 11 following suspension, Dallas replaced Jack Harrison and Samu Saiz was dropped to the bench in favour of Adam Forshaw.

Forest boss Aitor Karanka made two changes of his own as Danny Fox replaced Michael Dawson and Matty Cash started ahead of Gil Dias.

There was, in truth, little to separate the sides in a contest that left plenty of quality to be desired, but the introduction of Jack Clarke injected much-needed energy for the hosts, with the youngster delivering a low cross that Hernandez should have turned home at the far post late on.

The intensity was ramped up in the closing minutes of the game with the home crowd growing impatient, and when Klich returned Dallas’ low cross into the six-yard box, Roofe applied the controversial finish at the far post.

Marcelo Bielsa: “If there is a handball, I can’t deny it if you say so, but it has nothing to do with luck. It was a beautiful game, we had 10 chances to score and the only chance they had to score was the goal they scored. “The effort that the team put in was moving; we attacked during the whole game. We had 10 chances to score and we only scored one goal and if you think it’s because we were lucky, it’s hard for me to admit that. Honestly it was a great performance for me.”

Aitor Karanka: “I don’t think I need to say anything, I think we were unlucky today. But the most important thing for me is my team. It’s true we didn’t have a lot of chances but they didn’t create a lot of chances. Everybody could see what happened.”

Next up for Nottingham Forest is a Carabao Cup fourth-round clash away at Burton on Tuesday evening, while Leeds are in action next Sunday afternoon as they travel to the DW Stadium to face Wigan. Both games will be shown live on Sky Sports Football.