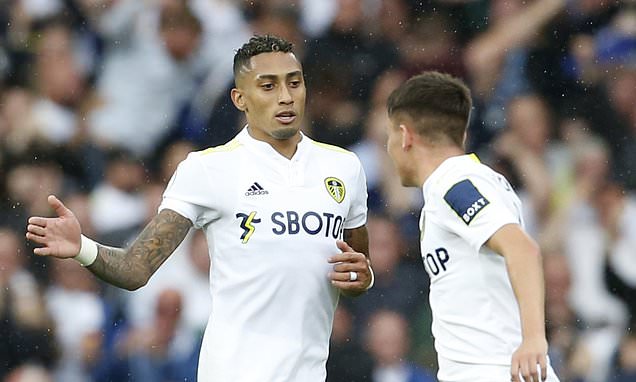 Leeds 2-2 Everton: Marcelo Bielsa’s side come from behind twice to earn a point against Rafa Benitez’s Toffees with the impressive Raphinha netting a fine equaliser

The small matter of 6,314 days on from the last time Premier League football graced Elland Road, Leeds fans were served a reminder of why this is the most-watched league in the world.

It was May 2004 the last time a full house watched top-flight action in Leeds, a 3-3 draw against Charlton when relegation had already been confirmed.

The mood here was markedly better here but the box-office, unpredictable nature of the Premier League was like they’d never been away. 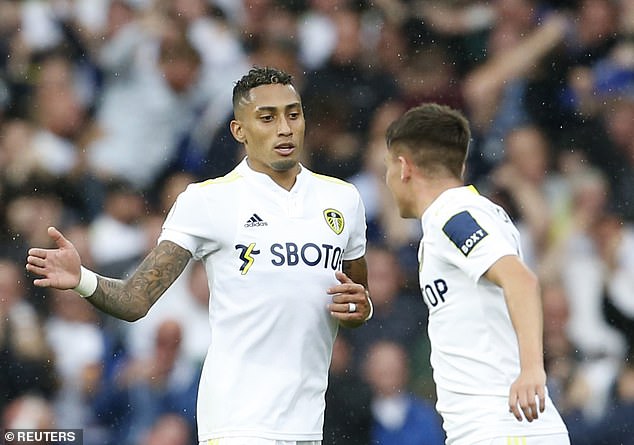 Raphinha celebrates his goal, which saw Leeds equalise in their clash at home to Everton 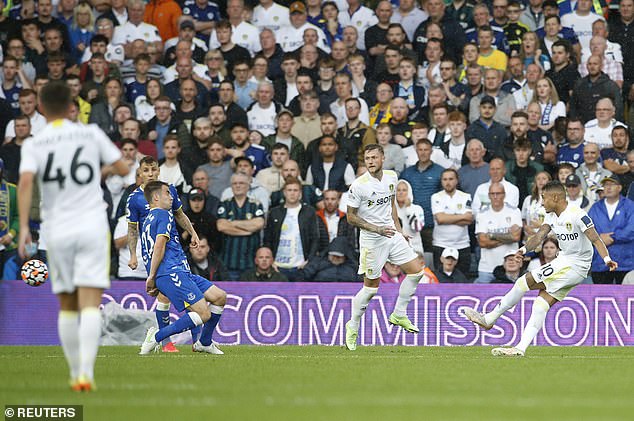 The Brazilian finished in fine style, with his goal helping Leeds to secure their first point 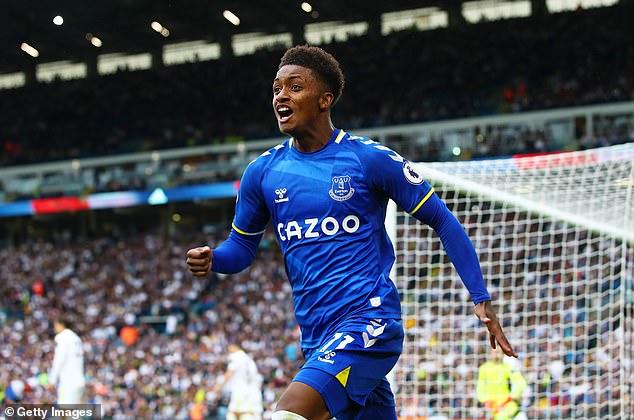 And whatever way you see it, this felt like a long time coming for Leeds and their fans, who heralded their new heroes 400 days on from when their promotion was confirmed.

Dominic Calvert-Lewin opened the scoring before Mateusz Klich equalised, before Raphinha cancelled out Demarai Gray’s goal in a game that could have gone either way. 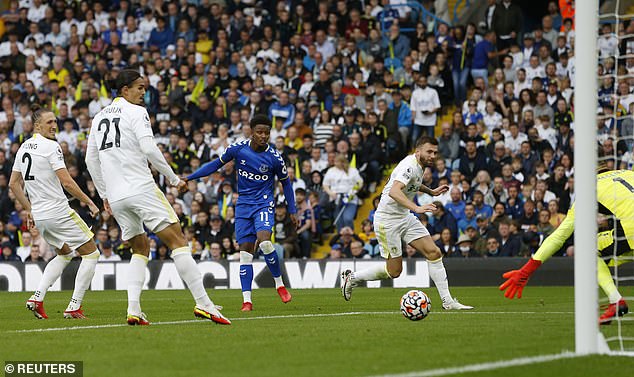 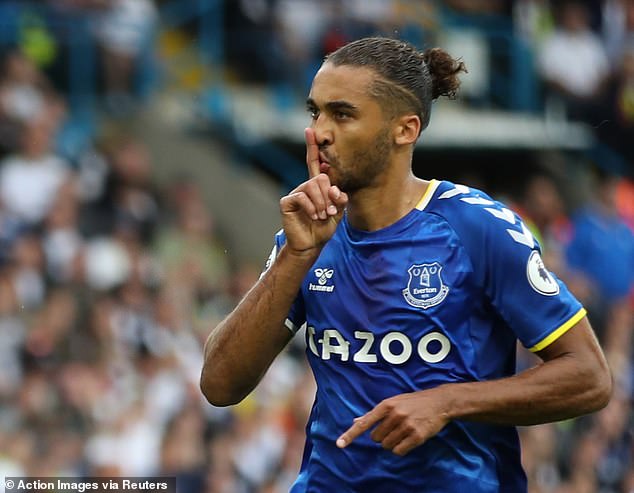 With the raucous crowd letting out a deafening roar to celebrate every tackle and interception, it’s no wonder it was the home side who started on the front foot, though they lacked composure in the final third.

Patrick Bamford, Raphinha and last week’s goalscorer Luke Ayling took it in turns to have speculative attempts from distance without calling Jordan Pickford into action.

The performance seemed worlds away from the 5-1 drubbing Leeds suffered at Old Trafford seven days ago.

Apart from long shots, the game was devoid of notable chances in the first half an hour. The lack of goalmouth action didn’t take away from the fact this was an entertaining game charged with energy, where no player shirked a challenge.

But for all the noise from an emotionally-charged 35,000 or so Leeds fans in west Yorkshire, they were soon silenced by a man from just down the M1, Sheffield-born Calvert-Lewin.

Silenced in both the literal sense and the fact the Everton forward wheeled away with his finger to his lips to shush the home crowd before breaking out into some dance moves and a knee slide.

The goal came from the penalty spot, after referee Darren England made his decision with the help of his friends in Stockley Park, the small matter of three minutes after the incident happened.

Gray played a teasing, fizzed cross towards Calvert-Lewin, who was wrestled to the ground by Leeds skipper Liam Cooper. To the naked eye it looked like a stonewall penalty. After slow-motion replays it looked soft.

But after much deliberation, referee England made the call and credit to him for having the guts to point to the spot in front of this raucous crowd.

Calvert-Lewin slotted hard and low to Illan Meslier’s right and proceeded on his best celebration routine while eyeing up the Leeds fans. He is a boyhood Blades fan after all.

It was his 55th Everton goal but first from the spot.

The Leeds forward seems to be adding to his game and is now much more than just a goalscorer. He drove forward and clipped a pass into the path of Klich, who had made a barnstorming run into the box.

The Polish midfielder took the ball in his stride and produced a composed finish to slot past Pickford for 1-1 and release Elland Road into pandemonium.

After all, it’s been 400 days since promotion was confirmed. It’s fair to say the Leeds fans have waited patiently for a moment like that.

But Everton took less than five minutes in the second half to regain their lead, via new boy Gray, who signed from Bayer Leverkusen this summer.

The Englishman was slotted in by Abdoulaye Doucoure and eventually got the ball under control after a poor first touch, before firing across goal into the bottom corner with his left foot. 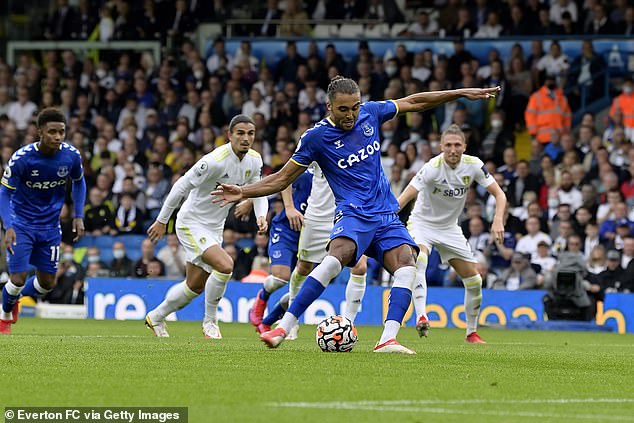 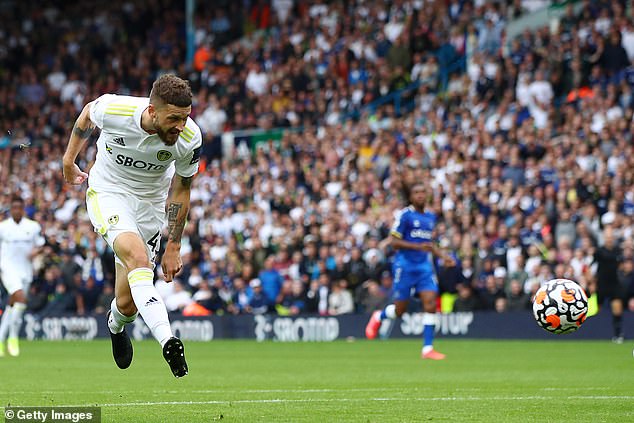 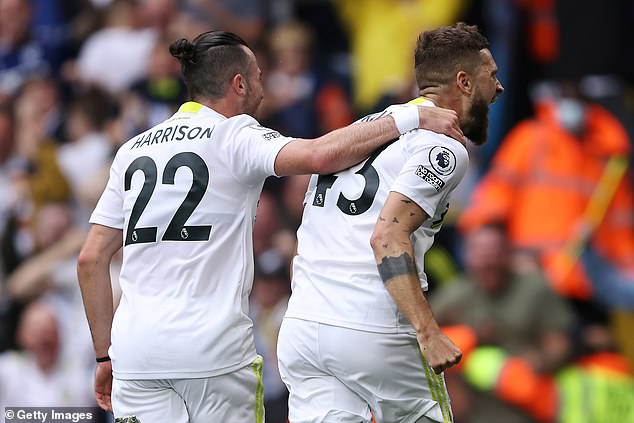 Gray continued to dazzle and was Everton’s best creative outlet here. After breaking through at Birmingham, Gray failed to seriously assert himself in Leicester’s starting XI.

Now 25, it is about time the winger matures as a player. On evidence here, he is doing just that and, at less than £2million from the Bundesliga outfit, he could be shrewd business in a cash-strapped market.

He drove at the Leeds defence every time he had the ball, and his first thought seemed to be, ‘Can I pick out Calvert-Lewin?’.

Time and again he did just that, but the England forward squandered a string of chances, shooting straight at Meslier twice from close range.

To say the away end were beginning to fall for Rafael Benitez would be a stretch, but they were certainly starting to slowly warm to their new manager.

That was until their side failed to deal with a long punt into the box which fell to Raphinha to unleash a powerful drive into the bottom corner.

And 17 years on from their relegation, it felt like Leeds fans had never been away from Premier League football. Well, it did until the last seconds, when the fans chanted for VAR as Bamford appealed for a penalty.

It was not given. Leeds could have won on their return but their fans did not care. They were treated to a thoroughly entertaining game and based on last season, there will be plenty more to follow in the coming months at Elland Road.