Leeds vs Derby, LIVE: Championship high-flyers face off in battle for promotion amid ongoing SPY storm

The build-up to this match has been marred by a spying storm that saw Lampard’s final preparations on Thursday interrupted after a mystery man was caught by police outside Derby’s training ground.

Derby currently occupy the last spot in the play-offs and will be looking to consolidate that with a victory tonight with a run of winnable games to come after while Leeds have a golden opportunity to extend their two-point lead over Norwich at the top.

Follow all the action from Elland Road here with Sportsmail’s JORDAN SEWARD.

If you are reading this on the MailOnline App, please click here.

‘Well the training stopped because the police came on the training ground so that’s disruption number one, then it went away. So I actually was made aware of it after training and then later with a phone call. What I will say is that we were training the day before the game on team tactics, team shape, personel, how we are going to press, how we are going to work on the ball, the fact that Harry Wilson wasn’t training will become very evident, so the person watching sees all of that. If somebody wants to say that isn’t relevant and won’t affect the game and tactics aren’t relevant and how you want to prepare, then that means Pep Guardiola, Mauricio Pochettino, Jurgen Klopp and all the great managers then they are just lucky because if preparation and tactics are not part of the game and aren’t sacred that you can work on your own training ground then they are lucky managers because they must be.’

‘No. I don’t care if it’s cultural because if it’s cultural and it happens in another country and if I am ever lucky enough to travel and potential possibilities comes up for me later on in my managerial career, when I travel to that country I will find out what the etiquette is in that country and I will abide by it which I think is a good thing actually to do in life not just football.’

‘I don’t think we need to [make a complaint] because he has admitted it. It’s up to the league to see how they deal with it. Obviosuly it’s not just Derby County. We had someone the day before we lost 4-1 against them. Now, Leeds can beat you 4-1 they are a fantastic team but we had someone in the bushses that day so twice this season now. The man was asked to leave but it wasn’t followed up like it was this time.’

‘Well that’s good, I spoke to him yesterday afternoon myself and he did the same to me so I’m pleased he’s done it again and said that. I think it makes it easier to deal with because at least, on a sportsmans’ level, it’s bad in my opinion.

‘If we are going to talk about culturally I did it somewhere else and it was fine then that doesn’t work for me because I don’t believe that it is fine on that level. It has disrupted our build-up for this game.

‘The fortunate thing is that it has disrupted us without really doing anything. People will stand here and say I’m trying to make excuses before the game, I will speak like this after the game as well, win, lose or draw because of what’s happened.’

Marcelo Bielsa: ‘It’s true there was someone from Leeds United. The [person] responsible of this incident is me. I am responsible for it. There is some decision that I need to give. It doesn’t matter if this is illegal or legal or if it is right or wrong.

‘I have a different point of view on it but the important thing is what Frank Lampard and Derby County think. I am the only [person] responsible for it because I didn’t ask the club Leeds United permission to do that.

‘Without trying to find a justification, I have been using this kind of practice since the qualifications for the World Cup with Argentina.

Frank Lampard will be hoping not to see a repeat performance this evening.

How ‘football geek’ Lampard is catching the eye at Derby

LAURIE WHITWELL: What might the alleged Leeds United spy have seen through those binoculars as he stood, not secretly enough, around the edge of Derby County’s Moor Farm training base?

‘The players enjoy the sessions. It is a very thoughtful environment with lots of hard work but elements of fun too,’ said a source.

Frank Lampard will not have welcomed the uninvited intruder, who was taken away by police, but he might deep down have liked the fact somebody was trying to gain an advantage in such a manner. The covert agent was found with pliers and a change of clothes. 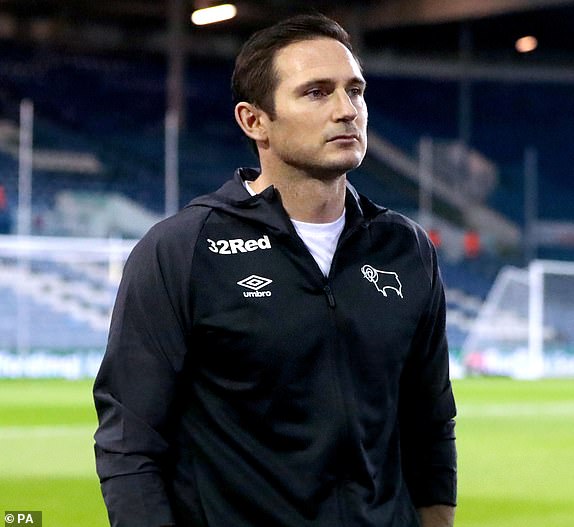 Here is how Leeds will line-up for tonight’s clash at Elland Road.

Here is how Derby will line-up for tonight’s clash at Elland Road.

This is how #DCFC line up to face Leeds United tonight… #LUFCvDCFC pic.twitter.com/c3jaWyj9nD

The Rams have arrived at Elland Road! ?

Team news will be on the way shortly… ?#LUFCvDCFC pic.twitter.com/KtwNMQ557l

ICYMI: You can read our EXCLUSIVE story on the spying storm here

Derby County manager Frank Lampard was forced to halt a crucial training session on Thursday amid ‘spying’ concerns at the club’s HQ.

In dramatic scenes on Thursday, the Rams boss was instructed to stop training after police were called to the scene after reports of a man acting suspiciously.

The man was spotted on the perimeter of the training pitch, appearing to spy on the team’s final session before Friday’s game against Leeds.

SAMI MOKBEL: The FA are set to investigate the spying storm that is overshadowing tonight’s Leeds v Derby clash – with the mystery man caught by police outside their training ground confirmed as an employee of their Championship rivals.

Sportsmail revealed how Derby boss Frank Lampard was forced to halt training on Thursday amid concerns in dramatic scenes at the club’s HQ.

The two sides meet at Elland Road tonight and Derby confirmed ahead of the match that they are in talks with Leeds after the ‘suspicious’ man was found to work for Marcelo Bielsa’s side. It is understood the suspect was in possession of a pair of binoculars and a change of clothes.

? | Game on! The lads arrive at Elland Road for tonight’s clash! pic.twitter.com/UysCqD2oBC

and welcome to this live blog of Leeds United’s top-of-the-table clash with Derby County.

We are just over an hour away from kick-off, but fear not as we have got you covered. We will be keeping you busy right up until the first whistle, so stay with us.

Teams news will be brought to you as soon as we have it.