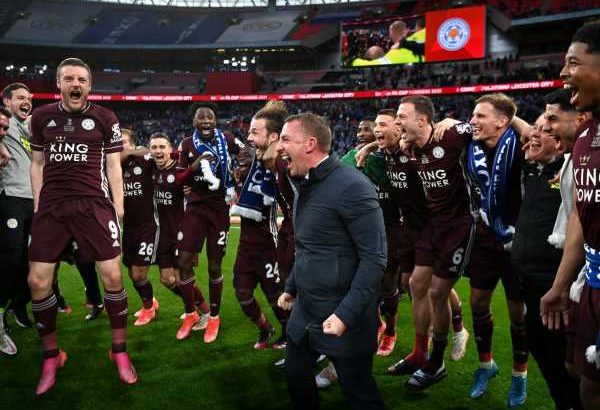 As fireworks coloured the skyline and tinsel coated Leicester City, crowning their moment as FA Cup winners for the first time in the club’s history, football was as we knew it again.

The possibility, the jeopardy, the thin line between success and sadness. Above all that, there was the return in mass of the people that make it matter beyond a scoreline and metal.

In keeping with the theme of the season, the 140th FA Cup final will be remembered more for off-pitch occurrence rather than its pieces of play.

Youri Tielemans decorated and decided the spectacle by taking a touch and dispatching a rising scorcher into the top left with 63 on the clock, but it was the soundtrack and scenes that accompanied the glorious hit that stood out after a sleepy affair.

There was nothing artificial about the noise blasting out from the Leicester City supporters when the ball flew past Kepa Arrizabalaga and flung into the net; guttural screams of joy and relief, painted with hugs, pumping fists and the widest smiles.

Chelsea fans were silent before cursing, dropping their heads in hands then dusting themselves off and delivering a rallying cry.

There were 21,000 in the terraces at Wembley to give greater meaning and feeling to everything.

The euphoria countered by the ‘oh FFS’ that greeted Kasper Schmeichel’s wondrous saves to thwart Chelsea shaped the entertainment as much as the goalkeeper’s interventions.

The electricity of the place when Ben Chilwell’s 89th-minute effort that pinballed off Wes Morgan was scrubbed by VAR for a mistimed run, told the story of pent-up thrill.

Supporters were able to experience the good, the bland, the Decision: No Goal together again. There amongst it all.

“Having fans after the year we’ve all had, it’s fantastic, a sign of progress, and hopefully a sign of things to come,” Schmeichel said pre-match. It cannot be understated how crucial it was and not only in a light at the end of the behind-closed-doors tunnel kind of way.

Saturday’s showpiece was severely slim on attacking drama – the first shot on target only materialised on 53 minutes – but it was the most significant event in the UK for 14 months.

It was hosted in front of the biggest crowd at a live event since the first lockdown and forms an instructive part of easing of Covid-19 restrictions in England.

The final serving such a purpose is fitting for a campaign that will be distinguished by fan and player empowerment. The first group have discovered the power of the voices and direct action, the latter are finally free to stand up for what they believe in.

As Leicester indulged in their celebrations, Hamza Choudhry and Wesley Fofana used the spotlight to hold aloft a Palestine flag and draw attention to the innocent lives being lost in the Israel-Gaza conflict.

There was a disappointing choir of boos when both teams took the knee for equality prior to kick off, but the fact that footballers were emboldened to push for that is a testament to shifting sands.

The rise in empowerment on the terrace and in dressing rooms was specifically immense in dismantling the Super League.

To that end, triumph for Leicester – a well-run and supremely coached club that scared the ‘Big Six’ enough for them to attempt a closed shop – is pure poetry.

The elite know that Brendan Rodgers’ charges will not stop being an inconvenience, even if they cede their best players to the traditional powerhouses – as with the recent cases of Harry Maguire and Chilwell.

Leicester are a story of sustainable success, of managing the balance between growing and staying committed to their community – all while playing progressive football with collective strength as individual talents are maximised.

That is credit to the ownership led by the passionate Aiyawatt Srivaddhanaprabha, who will no doubt dedicate this to his late father Vichai. It is a win for the club’s behind-the-scenes operation, and deserving reward for Rodgers, who became the first manager to win both the English and Scottish FA Cup since Sir Alex Ferguson.

There has not been much to like in football this season, but Leicester’s victory was one to love for its deeper meaning and wider connotations that played out to a backdrop of people that matter.