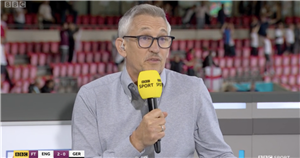 The Three Lions emerged victorious at Wembley thanks to goals from Raheem Sterling and Harry Kane to dump Germany out in the round of 16.

Lineker was presenting for the BBC alongside fellow England legends Alan Shearer and Rio Ferdinand, as well as German icon Klinsmann.

There were jubilant scenes in the Wembley studio when England scored their winning strikes.

And Shearer and Ferdinand were quick to lavish praise on Gareth Southgate and his side for their excellent performance.

Klinsmann, a winner with Germany at the 1990 World Cup and Euro 1996, was understandably disappointed at his nation's exit.

But he was extremely diplomatic in his verdict of the match, admitting England were the rightful winners.

"Well deserved from England, they believed and they dominated the second half," said Klinsmann.

"Germany had two or three big chances but they didn't use them – England used theirs so well deserved, a fantastic night for England."

Lineker praised Klinsmann for his reaction, thanking him for his words and saying he was "very gracious".

The German replied: "I really tried hard (to be good in defeat) I’m not a very good loser. It’s well deserved a great performance. You got to smell it and go for it."

As a player who has been there and done it on the biggest stage internationally, Klinsmann admitted that things were looking good for England to go all the way.

"This is England's moment," he went on. "You've got to realise, you go through to the quarter-finals, and they can play in a semi-final here. There may be a sell-out crowd in the final…

"It's not going to be an easy road to the final, but it's doable and now they've shown the belief.

"Harry Kane broke through and scored his first goal, the energy is high, so you've got to take advantage of that and win this (Euros)."