Liverpool could sell Mohamed Salah if they get a deal for Timo Werner over the line, according to Charlie Nicholas. The German is on Jurgen Klopp’s summer shopping list and a move to sign the striker is looking increasingly likely despite the complications of the coronavirus crisis.

Many have raised the question as to where Werner fits into the current attacking set up.

Sadio Mane, Mohamed Salah and Roberto Firmino are almost certain to remain first choice, leaving Werner with the unenviable task of breaking into the starting line-up.

Some have suggested that Klopp could adjust the system, with Firmino dropping deeper into the No 10 position in a 4-2-3-1 formation.

Werner is clearly aware that he will need to fight for his place though, laying on record his desire to improve amid interest from Liverpool.

JUST IN: Liverpool are about to do something unorthodox in Timo Werner transfer chase 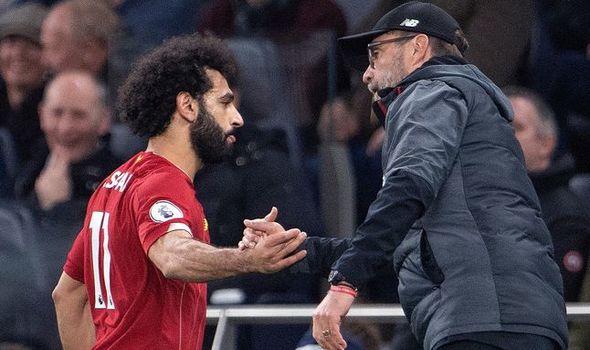 “Yes I know that Liverpool is the best team in the moment in the world and when you’re linked with the team, it makes me very proud,” he told Viasport.

“In case of that, it’s a pleasure, but I know that in Liverpool play a lot of good players and I have to improve myself to learn much more things to get on this level to play there.”

Werner will bring goals to the table but in the view of Charlie Nicholas, he could push one player in particular closer to the exit door.

“As much as Liverpool are talking about Timo Werner coming from RB Leipzig and potential other buys, it might be Salah that gets moved on,” he told Sky Sports when picking his Team of the Season.

“I would be careful about Mane, as I believe even Lionel Messi picked him as one of his Ballon d’Or choices.

“Salah has been great and Liverpool fans love him, but the two they may want to keep are Mane and Firmino.

“They have more options about them, not better players necessarily. Salah is that type as he gets the goals.”

Salah is tied down to a long-term contract and remains a huge part of Klopp’s plans to assert dominance on English football.

Jamie Carragher is not of the same opinion though and he believes Liverpool are only going to get stronger before they get weaker.

“No, they don’t need to let anybody go, they just need to add to the squad that they’ve got,” he told Viasport.

“Don’t forget that Liverpool never signed a player last summer so you would think there is a lot of money there waiting to be spent.

“Jurgen Klopp is maybe just waiting, another year on, some players have got another year older and then he can maybe refresh it.”