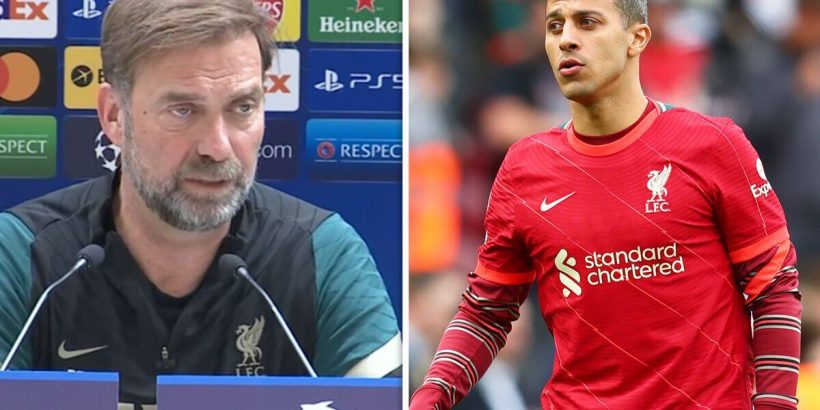 Liverpool boss Jurgen Klopp has revealed Thiago Alcantara could be fit for Saturday’s Champions League final against Real Madrid. Klopp admits he is surprised at how well the Spaniard has shaped up after suffering an injury on the final day of the Premier League season.

Thiago limped off during the 3-1 win over Wolves on Sunday. After the match at Anfield, Klopp was downbeat about the midfielder’s chances of playing at the Parc des Princes.

Klopp initially told the press: “I think he’ll be out of the final but I don’t know. He’s limping, so it’s maybe not the best sign.”

However, the German has now given the latest on Thiago. Speaking at his press conference on Wednesday afternoon, he said the 31-year-old is set to train on Thursday and is in contention to play at the weekend.

Thiago was not in Liverpool’s open training session on Wednesday morning. But Klopp says the news is positive on the former Bayern Munich star.

Klopp said: “I only met him inside, there’s a good chance. It’s surprisingly good.

“The good news overnight was that it was not that bad. He could be able to train tomorrow.”

Fabinho and Joe Gomez have both been struggling with their own injury problems. But they both took part in Wednesday’s training session in a double boost to Klopp.

Liverpool suffered final heartache against Real in 2018. Mohamed Salah says he wants revenge over Real after he was forced off with a shoulder injury in the first half of that match.

But Klopp insists revenge is not something he thinks about. He added: “No. I don’t believe in revenge.

“You always meet twice in life. It’s all fine between me and Real Madrid. It’s a football match of the highest level.”

Meanwhile, Klopp says he has big respect for Real boss Carlo Ancelotti ahead of Saturday’s showpiece match. He said of the Italian: “My English isn’t good enough to find a word for it, but what Carlo is for me is obviously one of the most successful managers in the world and is a role model in how he deals with success.

“He’s one of the best people you can ever meet, really nice guy. I have a good relationship with him but obviously that had to be on hold when he was at Everton! The respect for him couldn’t be bigger.”