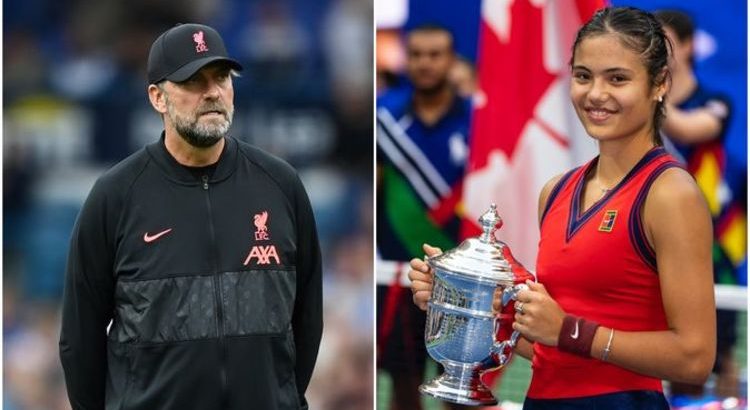 Jurgen Klopp has hailed British tennis sensation Emma Raducanu as the ‘talent of the century’ after her heroic US Open success. Raducanu defeated fellow teenager Leyla Fernandez in a stunning final on Sunday despite starting the tournament as a qualifier.

It was Raducanu’s first ever Grand Slam win. Her 6-3 6-4 victory meant that she did not drop a single set in New York.

The 18-year-old’s success came just months after her brilliant run to the fourth round at Wimbledon.

Several sporting figures have come together to praise Raducanu, who rose 127 world ranking places to No 23 following her triumph at Flushing Meadows.

And Liverpool head coach Klopp is the latest to comment on the Bromley-based star’s incredible victory.

The German has labelled Raducanu the ‘talent of the century’, which is high praise given the world-class stars he has coached.

“I watched the final and it was absolutely impressive,” Klopp said before the Reds’ Champions League clash with AC Milan.

“These two girls were 18 and 19 and what they showed was massively impressive. Then we watched the trophy ceremonies as well and both girls, how they spoke at 18 and 19, that was inspiring to be honest.

“Maybe even more so than the tennis, and that was inspiring enough. I was absolutely overwhelmed with how they presented themselves.

“Fernandez was obviously disappointed with losing the game, and rightly so as it was really close. Emma showed great respect for her. They knew and hoped that they would face each other again in the future and in more finals.

“So it was just a great display of elite sportsmanship, of elite sport. How humble you can be when you are that young but on top of the world.

“About the tennis story I don’t know enough, but when you are 18 years old and able to win the US Open, she’s for sure the talent of the century but without hard work it’s not possible to be there.

“To see her smiling during the game, it’s just the nicest thing. I will watch women’s tennis much more now than I did in the last few years.”

“I first started when I was a little girl but I think the biggest thing that you have visions of, for me it was just winning, the winning moment, and going to celebrate with your team in the box.

“That’s been playing in my head a couple of nights. I’ve fallen asleep to that.”