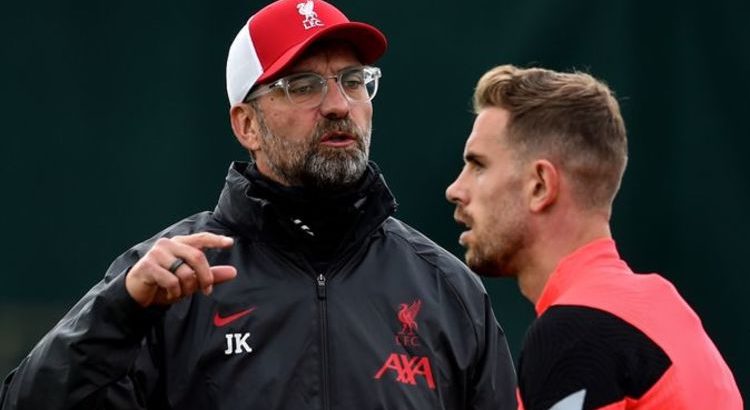 Liverpool boss Jurgen Klopp has previously made clear his affection for Jordan Henderson, in a transparent message to the club’s owners that he would like to keep his captain.

The midfielder has emerged as a shock contender to leave Liverpool this summer and the news has caused concern among supporters.

Henderson has two years remaining on his contract and will be 33 when it ends, meaning that he might no longer be a regular starter in their team.

He has been an important part of Klopp’s rebuild of the Reds. Their pair have won the Champions League together and ended the club’s 30-year wait for a top-flight title in 2020.

Klopp has played Henderson 243 times, the most of any coach in the 31-year-old’s career.

JUST IN: Man Utd already have three Paul Pogba replacements at the club

However, The Athletic reported on Monday that Henderson might not sign a new contract as he is unsure over how frequently he will appear under Klopp in future.

Liverpool are widely reported to be interested in signing a new midfielder this summer but an arrival is likely to be a replacement for the departed Gini Wijnaldum – not Henderson.

Klopp has a notable history of publicly praising Henderson, who has also played 64 times for England and finally scored his first international goal in the 4-0 Euro 2020 victory over Ukraine.

In June, LFCTV released a documentary about Henderson’s impact at Liverpool and Klopp praised the player’s longevity.

“It’s a great achievement and there’s no doubt that he is, and will be forever, a Liverpool legend. I am really proud of him.

“Our story is very much Hendo’s story and you could see how happy everybody was for him when we won it and everybody wanted him to get the trophy and all these kind of things.

“That’s a massive sign from a team, you don’t have that a lot.

“So probably people always respect their captain, most of the time I would say, but respect and love – not a lot of them get.”

When Henderson lifted the Premier League trophy in July 2020, Klopp’s pride in his contribution was evident again.

“With all the things people said about him in the past before I came in, I don’t know what it was exactly, but he made his way. It is absolutely deserved.

“Yes, other players played an exceptional season, 100 per cent, but if you want to have a guy that really fought his way through to the point where he is now and [what he] became, it is just absolutely deserved, one of the best players in the league.

“He’s an exceptional person, to be honest.”

Henderson was voted Football Writers’ Player of the Year in the same summer and was emotional when shown a clip of Klopp congratulating him on his award.

His potential departure would leave Klopp needing to fill another hole in his squad and it is clear that the 54-year-old would rather he remained.
Source: Read Full Article