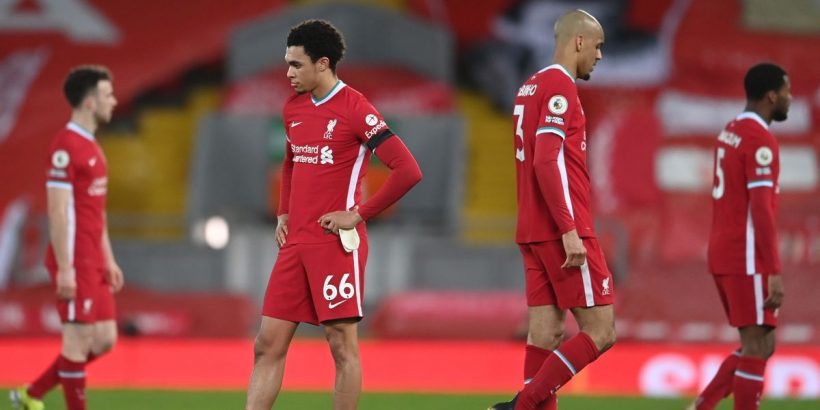 Mason Mount produced a moment of brilliance to pile more pain on Jurgen Klopp and his homesick Liverpool flops.

Talk about two teams travelling in opposite directions.

The champions have now lost five straight league games at Anfield for the first time ever – and Klopp's men are now hurtling backwards even faster than the Blues are heading forwards.

Klopp has grown accustomed to making history on Merseyside, but him and his team are now creating it for all the wrong reasons.

Having won the Champions League 21 months ago, the title holders might not even be in the competition at all next season as the crisis deepens.

The Premier League title holders appeared to have arrested their slide with a convincing win at Sheffield United last time out and Klopp made just two changes.

Alisson returned in goal after missing the Bramall Lane triumph due to the death of his father, while Fabinho came into the heart of defence alongside Ozan Kabak as Klopp named his 20th different centre back partnership of the season.

The Blues also made a couple of changes following the goalless draw with Manchester United.

Timo Werner was recalled to lead his side's attack at the expense of Callum Hudson-Odoi, while Jorginho replaced Mateo Kovacic in midfield.

This felt like a significant showdown in the scheme of things – and the stakes were raised even higher before kick off when both Everton and Tottenham won.

The home side threatened first when Roberto Firmino's pass almost released Mohamed Salah and Edouard Mendy was forced to charge from his goal to hoof the ball safe.

Moments later Andy Robertson shot wide as the Reds looked to impose themselves on the game.

Tuchel's men threatened themselves on 10 minutes when Werner lashed a shot just off target before the German blew a golden chance to fire his side ahead.

Cesar Azpilicueta hooked a hopeful ball back over his head and into the Reds' box, which deceived Thiago and fell straight to Werner, who tried to lob Alisson but failed miserably.

Even when the lively Werner did find the back of the net on 24 minutes his effort was ruled out for a marginal off-side decision by VAR.

It was becoming a game of missed opportunities and Sadio Mane was the next to do just this when he ruined Salah's sublime pass with a fluffed finish.

The home side were playing with fire operating with such a a hugh defensive line and they got burnt on 42 minutes when N'Golo Kante's ball released Mount down the left.

Fabinho went across to deal with the problem, but the sensational Mount drifted inside him before picking his spot to beat Allison with a clinical finish and make it 1-0 to the visitors.

The lead was well deserved and it took a goal-line clearance from Robertson to stop Hakim Ziyech from doubling the advantage.

Klopp had seen enough and hauled off Salah just after the hour mark. It was the earliest he'd even been taken off by Klopp in a home league game and the Egyptian responded by aiming a kick at the cool box.

It was the most memorable thing he did all night.