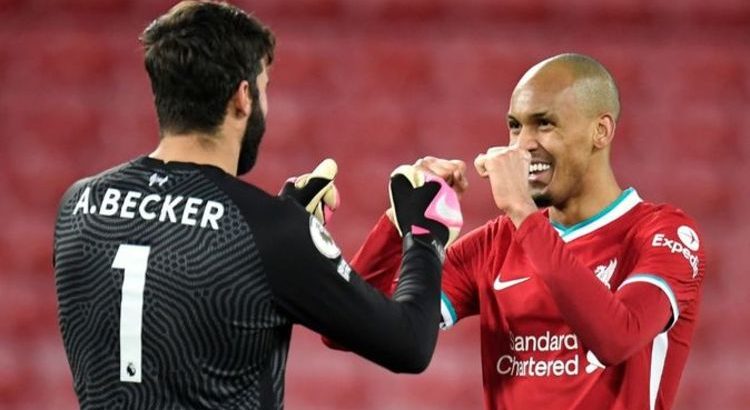 Liverpool are adamant that banned Brazilian trio Alisson Becker, Fabinho and Roberto Firmino (injured) should all be allowed to play this weekend against Leeds, reports claim. The Reds have been stung with an unexpected blow as FIFA enforced a five-day ban for eight Premier League players who failed to report for international duty with Brazil.

The Brazilian Football Association are understood to have lodged a complaint to FIFA, who have now taken action by ruling that those involved will not be able to feature in this weekend’s Premier League fixtures.

Alisson, Fabinho, Firmino, Gabriel Jesus, Ederson, Thiago Silva, Fred and Raphinha have all been told they’ll have to sit out this weekend’s contests to their despair.

Liverpool, Manchester City, Chelsea, Manchester United, Leeds and Everton all ruled that their Brazilian stars would not be joining up with their countries, to avoid quarantine restrictions on their return.

Tottenham and Aston Villa have provided first-hand evidence as to why that may have been a smart idea with Cristian Romero, Giovani Lo Celso, Emiliano Martinez and Emiliano Buendia now all isolating in Croatia.

The four Argentina stars were wanted by health officials and police in Brazil on Sunday after skipping quarantine upon arrival in the country as the World Cup qualifier between the two sides erupted into chaos.

Now the Liverpool Echo claim the 2019/20 Premier League champions are set to consider their next step carefully, as they believe both Alisson and Fabinho should be allowed to play.

The report states they are determined their players can and should be able to play at Elland Road.

Liverpool believe FIFA should apply common sense to the situation given that the Brazilian internationals would have had to isolate for 10 days upon return to the UK.

That would see them miss four games and with two more international breaks coming up, Liverpool are adamant they need to protect their fortunes this season.

It means Caoimhin Kelleher could be in line for another senior appearance for the Reds as he prepares to slot in for Alisson between the sticks.

The young Irishman impressed in last season’s Champions League group stages when slotting in for the former Roma goalkeeper, leapfrogging Adrian to the club’s No 2 spot.

Liverpool are expecting to welcome back Alisson and Fabinho for the Champions League opener against AC Milan at Anfield next week.

Everton are the only club that are exempt from the ban, meaning Richarlison has not been punished despite failing to report for international duty.

That’s because the Toffees have a good relationship with the Brazil national team set-up after they let Richarlison play for the Selecao at the Olympic Games.

The decision has paid dividends for them with Richarlison now free to play on Monday against Burnley.

Meanwhile, Raphinha reportedly turned down the call up himself but Leeds are still set to be punished for his actions…