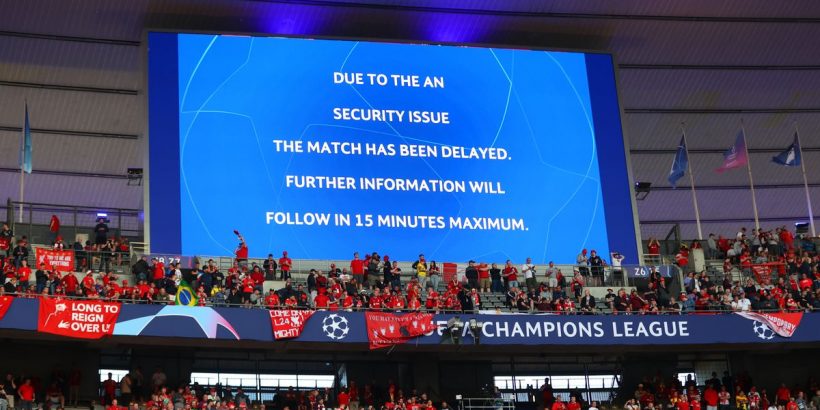 Liverpool fans were reportedly targeted by tear gas as they attempted to enter the State de France for the Champions League final on Saturday night.

Reds fans were met with chaotic scenes as they made their way into the stadium in the French capital on Saturday, and were seemingly herded away from the Liverpool end. Instead, reports suggested they were pushed towards the Real Madrid end.

Gary Lineker, who was struggling to gain entry to the ground just 15 minutes before the original kick-off time, wrote: "Finding it impossible to get in the ground. This appears to be very dangerous. Absolute carnage."

Security and policing at the ground was slammed by many inside the stadium, as footage emerged showing thousands of Liverpool fans being bottlenecked into a solo gate. And Liverpool fans outside the ground reported police using tear gas to contain the crowd.

Kick-off at the Stade de France was delayed by 15 minutes due to security issues outside the ground, with ticketed Liverpool fans unable to get in.

But it also seems there were some without tickets who were attempting to get into the stadium. Footage from BBC showed fans pushing over security barriers and jumping past fences in order to get into the ground.

James Olley from ESPN explained to BBC 5 Live that the issue was the location of the perimeter for ticket checks. He said: "It is the outer perimeter that is the problem.

"It is a stadium that has main roads out of Paris and the river at the back and the issue is that there are underpasses where they have decided to check tickets. At that point they are checking tickets, searching bags and taking alcohol off people.

"The problem is it takes time but secondly there are a lot of people outside without tickets. In an ideal world you would want something to stop tens of thousands of people without tickets getting to the outer perimeter and chancing their arm. It is tense out there."