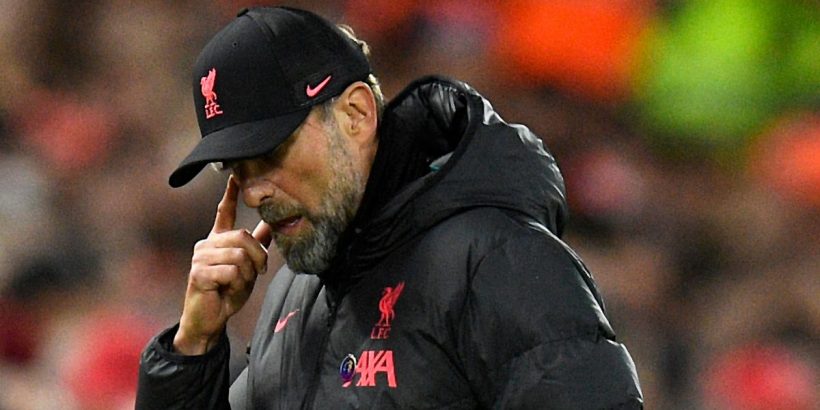 Liverpool fans have started to turn on Jurgen Klopp after Leeds United netted an 89th-minute winner at Anfield on Saturday evening.

Young Dutchman Crysencio Summerville wriggled free in the box to turn the ball past Alisson – sending the Leeds fans, and under fire boss Jesse Marsch, wild. Liverpool were second best for the majority of the tie, and Leeds claimed a well-deserved three points.

The Reds are now clinging to their spot in the top half of the table, with 15th-placed Leeds four points from Klopp's side. And as Liverpool continue to slip down the Premier League table, some fans have started to call for change.

One fan tweeted: "Klopp has to go, I love him as a man and he has done amazing for us but it’s time."

"Bye Klopp. Thanks for all that you have done but it’s time to out," a second added. While a third tweeted: "I'm done with Klopp, you can't lose to Leeds even with the U23s team!"

Do you think Jurgen Klopp's time is done at Liverpool? Let us know in the comments section

Liverpool's fans had already been on the back of the Reds from the third minute as Joe Gomez gifted Rodrigo one of the simplest goals he'll ever score in front of the Kop.

Gomez delivered a blind pass that left Alisson, following a slip, in no man's land and Rodrigo with an open net in front of him. The former Spanish international didn't need a second invitation to turn the ball into the empty net.

Mohamed Salah had fired Liverpool level, when he found himself unmarked at the back post, but it wasn't enough for the Reds to secure any points after Summerville struck late on in the clash.

Liverpool now find themselves ninth in the table, level on points with Crystal Palace.

The Reds are in danger of seeing the Champions League sports run away from them, with fourth-placed Newcastle eight points ahead of Klopp's stuttering side. However, perhaps more worrying for the Reds fans is the relegation zone is closer to them than a European spot.