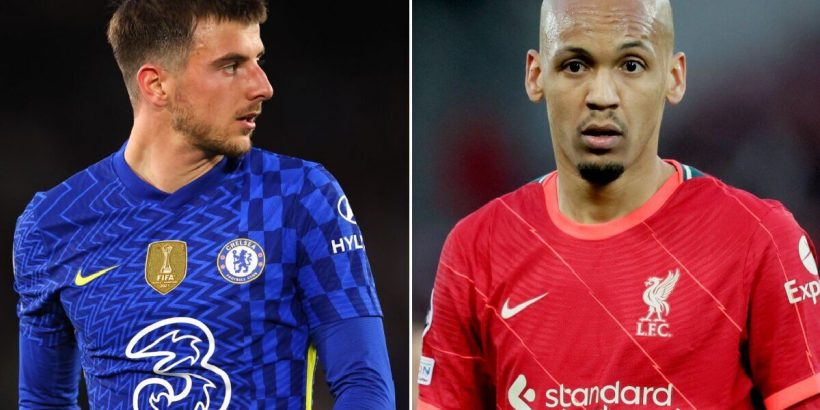 Liverpool face Chelsea in a domestic cup final for the second time this season as the two sides battle it out for FA Cup supremacy at Wembley this evening (4.45pm). The Reds are without influential holding midfielder Fabinho for the clash. Express Sport looks at three Chelsea players whom Liverpool will need to be especially wary of given they are without the destructive Brazilian.

Had Mason Mount been more clinical in the Carabao Cup final in February, Chelsea surely would have beaten Liverpool. The England playmaker wasted two glorious chances to score under the arch.

But regardless the 23-year-old is enjoying a phenomenal season for the world champions and has 13 goals and 16 assists in 51 games, with 21 direct goal contributions in 31 Premier League matches. He was Man of the Match in the midweek win at Leeds United.

And he will look to make the Blues tick at Wembley having linked up the attack at Elland Road. Both a creative and goalscoring threat, Liverpool will miss having Fabinho to protect the back four and Mount will look to drop into the pockets of space between the lines to hurt them. Deputy No 6 Jordan Henderson will be vital to stopping his international team-mate from doing too much damage.

Similarly to Mount, a player adept at finding space in dangerous areas is Kai Havertz, Chelsea’s Champions League-final winning hero last term. The German was excellent in the League Cup final when preferred to Romelu Lukaku and was crucial to creating several good chances.

Havertz, with 13 goals and six assists to his name, is Chelsea’s joint-second highest goalscorer alongside Mount this term. And he will relish Fabinho’s absence. He was Liverpool’s best midfielder in the previous meeting between the two teams with his positioning key.

Havertz will be tasked with stretching the Liverpool defence and opening up gaps in between the midfield and defence, and stand-in Henderson will need to be just as concentrated against the threat of the German as he will for Mount.

With three goals in his past two matches, Romelu Lukaku is firmly in contention to start against Liverpool. The Belgian was a real handful off the bench in the League Cup final and was only denied what might have been a winning goal by the narrowest of offside calls.

Even if he does not start from the off, Lukaku will be a real threat should he enter the fray in the second half. Having five substitutions available means the striker will surely be involved in some capacity.

Liverpool lack midfield physicality without Fabinho in there, despite the qualities the likes of Henderson, Thiago Alcantara and Naby Keita bring, which will make the physical tussle with Lukaku – who can pin himself against defenders and bring his team-mates into play – all the more important. Virgil van Dijk and his centre-back partner will therefore need to be on their A-game against a Lukaku looking more confident than in previous months.