Liverpool legend Graeme Souness has a “sneaky feeling” Jurgen Klopp could have a busier end to the transfer window than he has so far. Klopp has made just one signing so far in this window, bringing in left-back Kostas Tsimikas from Olympiakos for just under £12million. Bayern Munich midfielder Thiago Alcantara has been heavily linked with a move to Anfield but the €30m asking price has so far put the Reds off.

Souness, who both played for and managed Liverpool, believes the lack of signings so far is good news for the youngsters at Anfield.

However, the pundit reckons there could still be a big signing before the window shuts on October 5.

“I think it’s telling you something,” Souness told Sky Sports.

“I think Jurgen must feel he’s got players coming through the system to fill the gaps when the current players get injured.

JUST IN: Man Utd may trigger Mourinho anger by signing forward but not from Tottenham 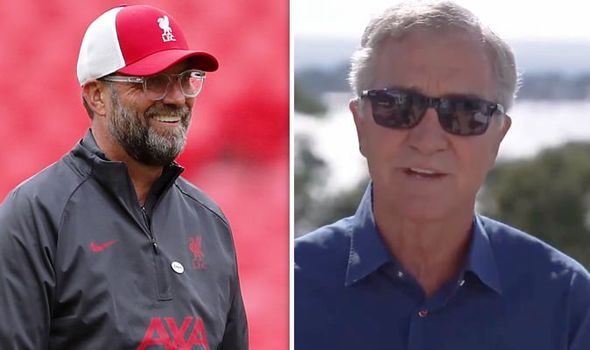 “Going back to my time as a player there, Liverpool always bought players when they were on top of the pile.

“You were buying players at that time where you don’t know if they’ll come in and be an instant hit.

“I think in recent history Fabinho and Andy Robertson were both that where they got them into the club, had a good look at what they had to offer, they fitted into the system nicely when they got introduced.

“So I think that would be a real vote of confidence to the young players at the football club if they don’t buy.

“But I have a sneaky feeling that they may still have a go at someone.”

Meanwhile, ex-Tottenham forward Darren Bent says strengthening the squad is something Klopp must do.

“The thing is with Liverpool, one to 11 they’ve got a very good team and deservedly won the Premier League, but they’ve not really added to that,” Bent said on talkSPORT.

“I think they just need more strength in depth.

“If you look at Manchester City going forward, if Raheem Sterling is starting and he doesn’t play well and he comes off, they replace him with [Riyad] Mahrez or Bernardo Silva – there’s no real drop off [in quality].

“But you can’t tell me that when [Mohamed] Salah is not playing well and they bring on Minamino, the levels are too different.

“I know [Takumi] Minamino scored at the weekend, it was his first goal, but for me he is nowhere near the player Salah is.”