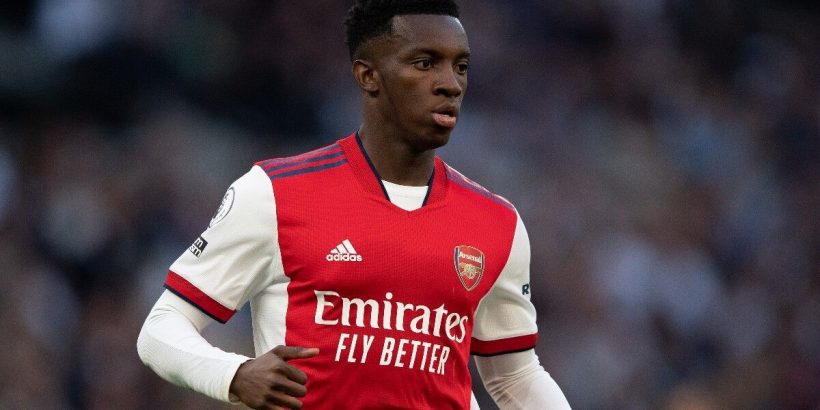 Steve McManaman has warned Liverpool that Eddie Nketiah is ‘not good enough’ to play for the Reds. Recent reports have linked the Arsenal striker – who is set to become a free agent in the coming weeks – with a surprise move to Anfield.

A recent report from 90 Min claimed that Jurgen Klopp’s side and Chelsea were mulling over a move for the 22-year-old. But McManaman believes that Nketiah would struggle to get into Liverpool’s team and instead advised the Hale End graduate to stay with the Gunners.

McManaman told horseracing.net: “I don’t think he’s good enough for Liverpool, to be honest. I like Eddie Nketiah, but he’s not going to dismantle any of that Liverpool front five and the club has an academy full of centre forwards, so I can’t see this move happening.

“Mikel Arteta has selected him a lot recently, but it wasn’t too long ago that he didn’t seem interested in him. He just has to work hard and keep improving. [Alexandre] Lacazette may leave on a free transfer this summer, so there could be space for him to continue with Arsenal. But he needs to see whether his manager is planning on bringing in two or three forwards. If he’s happy there, though and he’s playing there, then he should stay at Arsenal.”

Nketiah has made the most of a rare opportunity to impress for the Gunners after spending virtually the entire season on the periphery at the Emirates. The striker has netted four goals in six league games to nudge ahead of Alexandre Lacazette in the pecking order.

However, there are no guarantees that Nketiah will still be plying his trade in the capital next season. Mikel Arteta has already hinted that he is keen to keep the forward, who has been linked with Crystal Palace and West Ham in recent weeks.

Even if Nketiah does commit his future to the club, Arteta is expected to be in the market for attacking reinforcements this summer. Manchester City star Gabriel Jesus has emerged as the Gunners primary target – but they could struggle to convince the Brazilian striker to quit the Etihad if they are unable to offer Champions League football.

After being leapfrogged by Tottenham, Arsenal head into Sunday’s season finale against Everton needing their bitter rivals to slip against already-relegated Norwich City to stand any chance of clinching a top-four finish.

But Arteta insisted that the Gunners have already exceeded expectations this season – even if they only end up qualifying for the Europa League.

In an interview with Football Focus, the Spaniard claimed: “In a week’s time when we are on our holidays and we look back, whether we are in the Champions League or the Europa League, when we look back on what we’ve done, I think everybody will agree that we did more than was expected, for sure.”