Virgil van Dijk has made his excitement on the potential signing of Thiago Alcantara clear as the Spaniard closes in on a move to Liverpool. The Reds are believed to have agreed a deal worth an initial £20million for the Bayern Munich star, with a further £5m in add-ons.

News emerged this morning that the Premier League champions had finally made their move for the midfield maestro, who they have been linked with all summer.

The Reds finally tabled an official offer to Bayern after the European champions made it clear they wanted the player sold by the start of the Bundesliga this weekend.

Without the sale of Thiago, Bayern would not have money to spend on the rest of their squad despite there being several gaps that need filling. 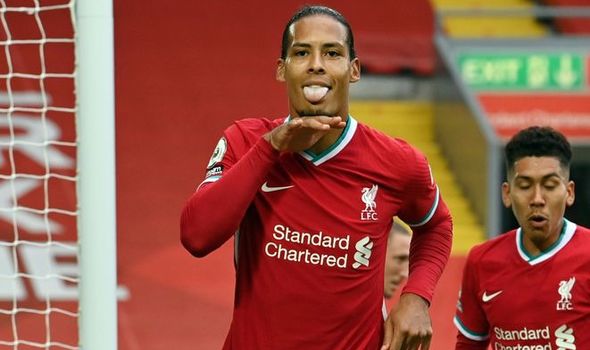 They were prepared to reduce their asking price for the player and Liverpool have now capitalised to the delight of supporters.

The colossal Van Dijk is evidently also excited, after favouriting a tweet from The Times’ Paul Joyce which confirmed the deal and Thiago’s new shirt number.

The tweet read: “Liverpool will pay £20m guaranteed plus £5m in bonuses to Bayern for Thiago Alcantara. Player will sign a four year deal and wear the No6 jersey.”

Thiago is now awaiting the green light to fly to Merseyside and put the finishing touches on his move to Anfield.

It has been his number one destination all summer since rumours first emerged in the Bayern dressing room that he wanted to leave the Allianz Arena.

He has had to bide his time though and wait for official contact from the Liverpool board, which finally came earlier this week.

Thiago will immediately bring world class quality to Liverpool’s midfield as they look to defend their Premier League title.

The Spanish international will be the club’s second summer signing after the arrival of Olympiacos full-back Kostas Tsimikas. 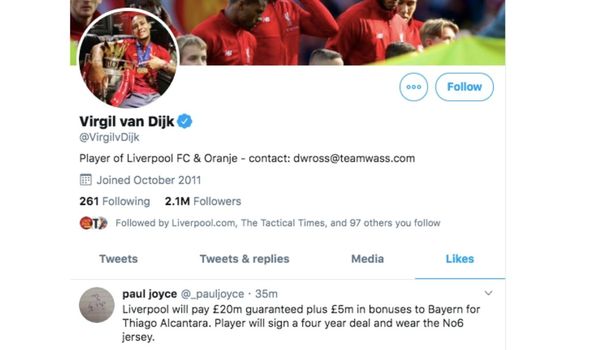 Last week while on international duty with Spain, Thiago hinted that he may stay at Bayern due to the fact there had been little movement.

But at Bayern, there was no doubt that his time at the club was coming to an end despite a burning desire for him to stay.

Liverpool are already stacked in midfield and the arrival of Thiago may have interesting connotations for the future of Gini Wijnaldum.

The Dutchman remains in contract talks with the club and has just nine months left on his deal amid interest from Barcelona.