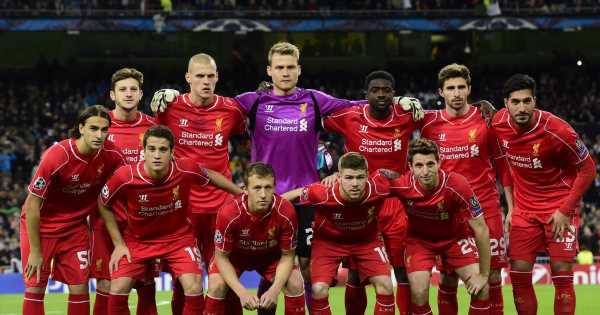 Liverpool face Real Madrid for the first time since the 2018 Champions League final on Tuesday.

But while that game had it’s own fair share of controversies, none were quite as infamous as Brendan Rodgers ‘throwing in the towel’ against Los Blancos in 2014.

The Reds faced Real at the Bernabeu in the group stage just months after almost ending their long wait for a Premier League title.

However, after two European defeats on the spin and a huge league clash against Chelsea on the horizon, Rodgers opted to drop a number of his stars.

“Rodgers has left out [Jordan] Henderson, Sterling, [Mario] Balotelli, Steven Gerrard and [Philippe] Coutinho at Real Madrid. He has, though, thrown in a white towel,” Gary Lineker said as part of the build-up. It stunned players and supporters alike, with Gerrard admitting his benching made him consider his future.

Liverpool’s much-changed team performed admirably in fairness, only losing 1-0 as they crashed out in the group stage.

Ahead of tonight’s clash, Star Sport take a look at the XI and where they are now. Rodgers kept the Belgian in goal, one of 54 appearances he made that season. He would remain at Anfield until 2019, when Alisson’s arrival deemed him as surplus to requirements.

He is now with Club Brugge back in Belgium, playing a key role in their run to the Europa League knockout stages. With Glen Johnson and Dejan Lovren given the night off, Maquillo started the game. One of just 19 appearances he made during a season-long loan from Real’s rivals Atletico.

He now plies his trade with Newcastle, while on the opposite flank, Moreno left Anfield after being a peripheral part of the Champions League winning squad in 2019, joining Villarreal on a free.

Toure was in and out of the side for much of his time with the Reds and after ending his playing career with Celtic in 2017, he is part of Rodgers’ coaching staff a Leicester City.

Skrtel was the only first choice option who retained his place, a solid servant for the clun, he joined Fenerbache, before joining Istanbul Basaksehir and was part of the side that beat Manchester United last year. Gerrard and Henderson’s absence meant Lucas and Allen were given starts against Real’s midfield pairing of Luka Modric and Toni Kroos.

Lucas left Merseyside in 2017, ten years after his arrival and his status as a true Reds icon safely in tact. Now with Lazio, the Brazilian is still a key component of the Italians’ starting XI.

As for Allen, he never lived up to the standards that many had hoped for when he arrived in 2012.

The Welshman joined Stoke in 2016 and has remained with the Potters, despite their relegation to the Championship.

Can was an important player for the entirety of his time with Liverpool, before joining Juventus in 2018. He is now back in Germany, where he has made 25 appearances in all competitions for Borussia Dortmund. Liverpool paid around £20m for Markovic at the start of that season and will undoubtedly go down as one of their worst signings in recent seasons.

That 2014/15 season would be his only full one with the club, before a number of loan moves saw him run down his contract. Aged 27, he is now rebuilding his career back in Serbia for Partizan.

Borini was another signing, Rodgers’ first’ that didn’t work out for the Northern Irishman. The forward scored just three times in 38 appearances, before eventually joining Sunderland in 2015.

Following another fairly low key spell with AC Milan, the 30-year-old joined Verona before being released and signing for Turkish outfit Fatih Karagumruk.

While his two fellow forwards left without achieving too much, Lallana departed with Klopp labelling him a club legend.

The former England international helped bring the Premier League title back to Anfield, before joining Brighton on a free last summer.

READ MORE: Inside story of Cole and Sheringham feud with Man Utd and England