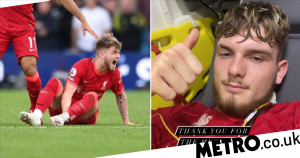 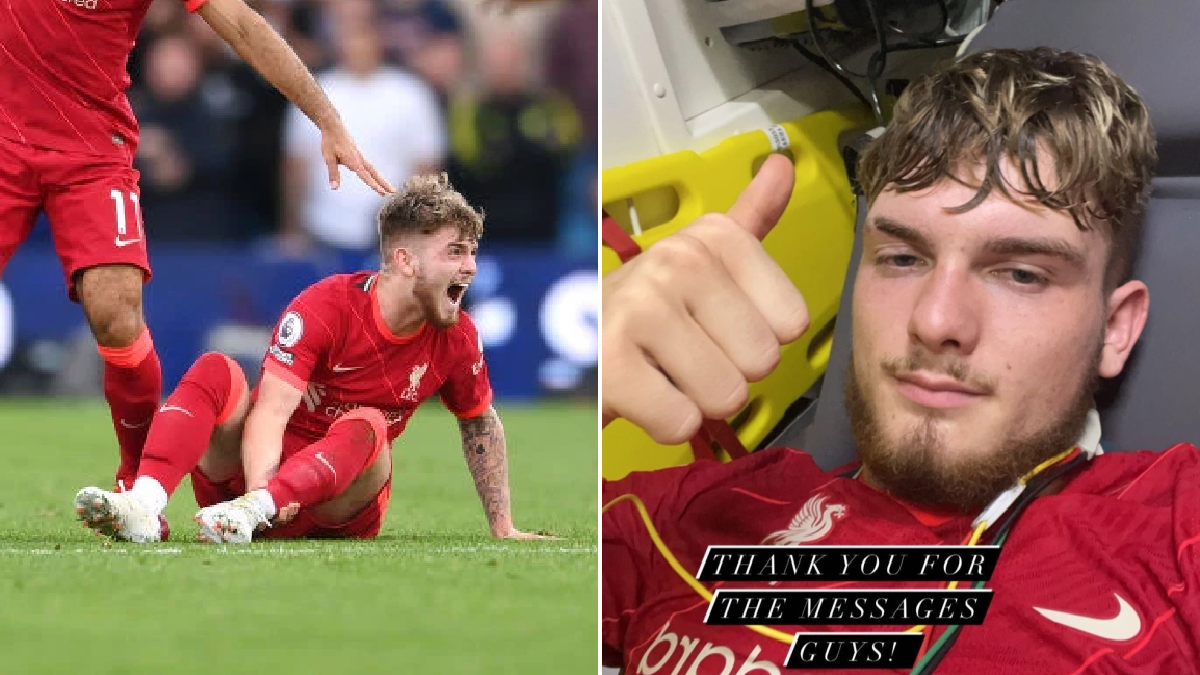 Liverpool midfielder Harvey Elliott has thanked fans for their support after he was stretchered off against Leeds United on Sunday with what appeared to be a potential ankle break.

The Merseysiders won 3-0 at Elland Road but the result was overshadowed by a horrific injury to their young midfielder following a heavy challenge from Leeds defender Pascal Struijk.

It was immediately clear that the 18-year-old had suffered a serious injury, with his teammates looking away in horror while a shocked Mohamed Salah waved to the dugout for Liverpool’s physios to get on the pitch as soon as possible.

Struijk was shown a red card for the challenge and Elliott had to be stretchered off, though there was a touching moment when the Leeds fans applauded the midfielder as he left the pitch.

Liverpool supporters also sang ‘You’ll Never Walk Alone’ to the highly rated midfielder, and he acknowledged both sets of fans and applauded back from his stretcher.

Despite the incident looking very bad indeed, Elliott appeared in surprisingly good spirits as he posted a message on his Instagram stories from an ambulance as he was transported to hospital.

‘Thank you for the messages guys! Road to recovery YNWA,’ he wrote, also giving a thumbs up.

Struijk had actually come on as a 33rd-minute sub for the injured Diego Llorente and looked inconsolable himself when he saw the extent of Elliot’s injury and was comforted on the pitch by Virgil van Dijk.

The challenge was deemed so bad that Sky Sports opted not to show any replays, with Elliott getting his left foot trapped under Struijk’s trailing leg as he went for the ball.

Liverpool were already leading 2-0 when Elliott had to be withdrawn, with skipper Jordan Henderson coming on to replace him.

The match was a fiercely but otherwise fairly contested affair at a lively Elland Road but, after a good start from the home side, Liverpool turned the screw and took the lead through Salah.

Fabinho added a second just after half-time, scrambling in from a corner, while after missing a host of chances Sadio Mane finally got on the score sheet in added time to wrap up all three points.