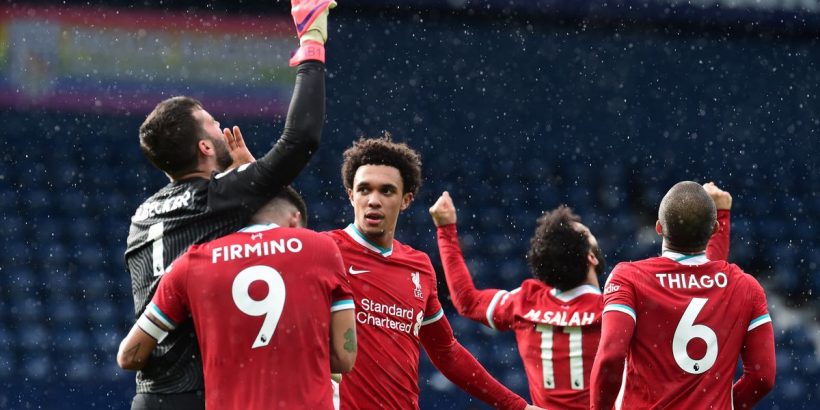 Alisson's dramatic late header away at West Brom kept Liverpool in the race for top four – which could be decided by the tightest of margins.

Jurgen Klopp's former champions were in desperate need of three points at the Hawthorns on Sunday, but Hal Robson-Kanu's early goal left them trailing.

Mohamed Salah then equalised just after the half-hour mark, before Alisson headed home the most astonishing of stoppage-time winners right at the death – becoming only the sixth goalkeeper to score in the Premier League.

His goal means Liverpool are now only one point adrift of fourth-place Chelsea and three behind Leicester in third, and the latter pair are due to play each other on Tuesday.

The Reds' two remaining fixtures come away at Burnley on Wednesday and at home to Crystal Palace next Sunday, while Leicester and Chelsea have tough outings against Tottenham and Aston Villa respectively after their meeting on Tuesday.

Winning both would all but secure Champions League qualification, and if Chelsea fail to beat Leicester it will guarantee it.

However, things could still get very interesting, as all three teams are extremely close on goal difference.

Leicester and Liverpool currently boast a goal difference of +21, with Chelsea on +22.

So what happens if they finish level on points and goal difference?

Previously, Premier League rules stated that this unlikely scenario would be resolved with a play-off match between the clubs in question, but that has since changed. The English top flight said in a statement: “If two or more clubs finish level in the table when competing for the title or European qualification, or when relegation is at stake, their records in the head-to-head matches will now be used to separate them.

“In previous seasons, teams involved in these specific battles who finished with the same points total, goal difference and number of goals scored would be pitted against each other in a playoff.

“But that extra match is now less likely.

“If clubs still cannot be separated, the team who scored the most goals away from home in the head-to-head matches will get the highest position.

“Only if the clubs remain level in the table after this will a playoff be arranged, at a neutral ground, with the format, timing and venue being determined by the Premier League Board.”