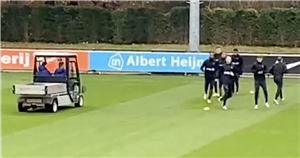 Louis van Gaal led Netherlands training from a golf buggy on Monday morning due to a hip injury he suffered after his side's capitulation against Montenegro on Saturday.

The former Manchester United and Bayern Munich boss was appointed as coach of the national side for a third time earlier this year following the departure of Frank de Boer.

The 70-year-old has looked as lively as ever on the touchline during his six games back in the dugout, but has now been forced to take it easy after injuring his hip.

Despite his condition, Van Gaal is not likely to have considered skipping training after watching his side throw away a two-nil lead against Montenegro at the weekend.

Having been placed in a wheelchair after a visit to hospital, Van Gaal was seen alongside another member of staff inside a gold buggy during training.

After speeding across the surface to get closer to the warm-up, the veteran boss could be seen passing instructions over the running of the session while keeping a close eye on his players.

It is not yet known how he will watch their final World Cup qualifier at home to Norway on Tuesday evening, with the Oranje needing a draw to secure qualification.

However, should they lose to Norway and Turkey beat Montenegro, Netherlands would miss out on even a play-off spot for the final tournament.

Will Netherlands have a chance of winning the World Cup should they qualify? Tell us in the comments section

Van Gaal said after Memphis Depay's brace was cancelled out by Ilija Vukotic and Nikola Vujnovic: "The changes were not good but I cannot really explain what happened.

"This leaves a bad aftertaste but I'm not going to criticise my players.

"They also really want to go to the World Cup. We still have to play against Norway and we have to prepare positively for that. We still have a chance. We are still in the best position."

"It was scandalous the way we played in the second half. We all want to have the ball, play football, attack and score. But sometimes you also have to think defensively too.