Last summer, Alex Telles’ arrival at Old Trafford looked like it could spell the end for Luke Shaw’s time at Manchester United. Last Sunday, after his best season for the club, he almost won the European Championships for his country. What a difference a year makes.

Shaw looked like the natural successor to Ashley Cole as England’s next left-back when he broke through at Southampton well before his 18th birthday, and then became the most expensive teenager in world football when United parted with £30m to secure the fruits of his huge potential in 2014.

He was nominated for Europe’s Golden Boy award later that year, but to say his career somewhat tailed off thereafter is an understatement.

You can almost pivot the highs and lows around the horror tackle from PSV’s Hector Moreno in a Champions League game in September 2015, which broke Shaw’s leg in two places, and could have required amputation. Almost three years on at the end of 2017/18, he had made only 22 Premier League appearances since that horrific setback, and had become United’s fall guy for manager Jose Mourinho.

A year later Shaw bounced back to become United’s player of the season, but even he admits he was far from back to his best. And at the start of 2020/21, Telles’ signing from Porto looked like it may spell the end of a mostly underwhelming career at Old Trafford, as Ole Gunnar Solskjaer sought more attacking presence down the left flank.

A remarkable turnaround in less than 12 months culminated in Shaw’s starting berth for England in Sunday’s Euro 2020 final, followed shortly after by his first goal for his country. Without dwelling on the rest of the match, even the disappointment of missing out on an international trophy cannot come close to dampening the fire which has been relit in the left-back.

As a teenager, Shaw and opposite number Nathaniel Clyne built a reputation as attacking, energetic full-backs in the all-action style of Mauricio Pochettino’s Southampton. But over the years, partly down to that horrific injury, Shaw regressed badly. In 2019/20 did not manage a single assist, largely down to creating an average of barely one chance per 90 minutes.

Compare that to his productivity at Euro 2020, where he made three goals and scored another despite starting six of the Three Lions’ seven matches. Not that his attacking instincts had been reborn in that tournament, but it was poles apart. 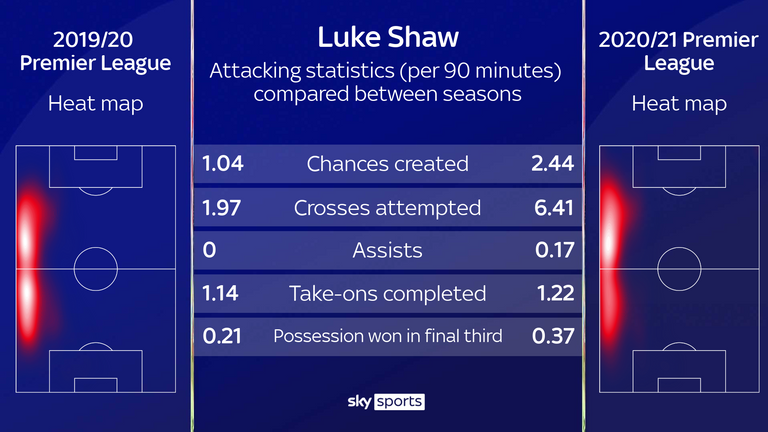 Indeed, a year ago Telles was meant to arrive at Old Trafford as the great provider, but it was Shaw who stepped up instead.

In a season where he made more Premier League appearances than any other since joining United, Trent Alexander-Arnold was the only defender to create more chances across the division. His crossing went through the roof, the third goal of his senior career helped his side claim a 2-0 win at Manchester City in March – and the fourth, at Wembley last Sunday, was on another planet.

None of these statistics tell the full story in isolation but even his heat map tells its own tale, with a far higher emphasis on his attacking output than defending in his own half. “I used to hold back from driving with the ball,” he admitted in a Sky Sports interview earlier this year.

“I feel like I always knew I had it in my locker but there were times when I did not use it. It was just about getting it out of me. I have started to do it more this season.” 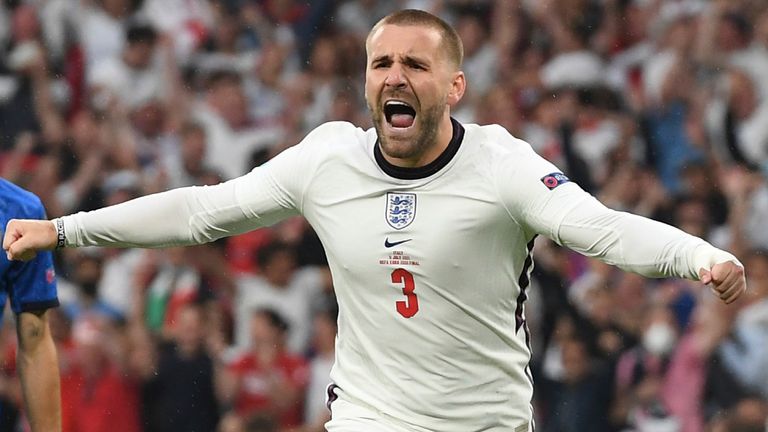 Solskjaer has teased that out and has made Shaw one of a number of players whose careers have progressed on since his appointment. “We’ve encouraged him to get into the final third more,” the manager said with a wry smile after watching his Euro 2020 final goal – although there was no joking about his faith in Shaw when he labelled him United’s second-best finisher after that City strike.

A less obvious muse is the head of Edinson Cavani, whose towering frame adds an obvious reward for Shaw’s trusty, if previously underused, left foot.

“I never used to cross it as much as I should have done,” Shaw said in that same interview. “It helps to have Edi and that threat in the box. It means that if you do deliver a ball he will be there to fight for it and give everything he can to win it.

“Since he came in, the lads up front have seen how he works and what he does. They are trying to copy what he does in the box so there is definitely more movement. It means that you don’t have to hit a man, you just have to hit a space and someone will be in there.”

Battling to regain form as well as a place in the Manchester United side, Shaw couldn’t seem to catch a break in the years after his return to fitness from his double leg break.

At times like that, most players’ confidence will take a hit – so disparaging comments in the media from then-United manager Mourinho did nothing to help matters.

After one rare but encouraging bright performance against Everton in 2017, the boss told the cameras “he used his body and my brain” rather than giving any meaningful credit to a player already short on self-belief.

“He was in front of me and I was making every decision for him,” said Mourinho. “He has to change his football brain.”

Shaw largely kept his powder dry on what was a clear dislike between the pair and has since done his talking on the pitch instead, flourishing in the last year under Solskjaer – and the change has been all the more obvious for those nearest to him.

“His ability’s always been there, he has all the attributes to be one of the best left-backs in the world,” said England and United colleague Harry Maguire during Euro 2020. “The main difference in terms of Luke is his mentality, pushing himself and really the demands he puts himself to not just be a six out of 10 each game.

“Not to play comfortable, to really push on, push himself to be the best player on the pitch. There’s no reason he can’t do that with the attributes and ability that he has.”

The manager himself credits Shaw becoming a father in 2019 as a major part of his growth, just one example of Solskjaer’s desire for him to take praise and confidence when it is deserved, rather than focusing on his own coaching methods. 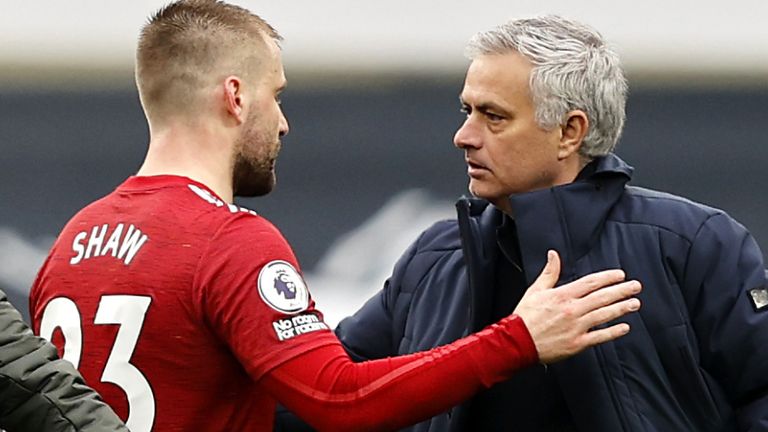 “Luke has matured so much in the last two-and-a-half years and I love to see his development,” Solskjaer said. “He’s now 25 and he’s becoming a man. and is one of the experienced boys in our team.”

Shaw is far from the only United player to benefit from his manager’s more considered approach and you could equally compare Marcus Rashford’s numbers to the Mourinho era too. Still though, few had such a weight lifted from their shoulders by the Portuguese’s departure. By that point, it had almost become a running joke that any mention of the left-back would come through gritted teeth.

He recalled himself: “I don’t want to come across like I was a little kid who could not deal with being put under pressure because at a big club like Manchester United you are always going to be under pressure and under the spotlight. That makes you mentally stronger.

“But I had no confidence at that time. I was losing my belief. I think that is what changed with Ole. He managed me right and I got my confidence back and I am really enjoying it at the moment.

“Enjoyment and confidence. For me, they are the two biggest things you need on the pitch. You need that belief in your ability to perform at the highest level. I feel I have that now.”

Enjoyment and confidence Shaw clearly has in abundance given the way he has played over the last season. Those qualities alone would be nothing without potential, of course, and at long last, seven years after he was counted among Europe’s brightest prospects, he looks to have finally realised that quality.

And despite featuring in the Premier League for almost a decade, Shaw only turned 26 on Monday and is still approaching his prime years – so the best could well be yet to come.