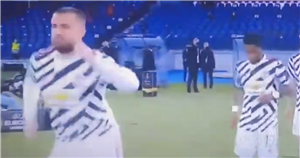 United were beaten 3-2 out in Italy last week, but they still advanced to the final having picked up a 6-2 victory in the first leg a week earlier.

Edinson Cavani's brace ensured goals from Edin Dzeko and Bryan Cristante, along with an own goal from Alex Telles, were not enough to hand Roma an unexpected lifeline.

Before kick-off, one United fan account spotted Shaw gearing up for the match at the Stadio Olimpico in a fairly unusual way.

As Ole Gunnar Solskjaer's men walked out onto the pitch, the England defender chucked his water bottle away before bursting into a bizarre hopping sequence which left supporters baffled on social media.

A fan account dedicated to Shaw posted the clip on Twitter and wrote: "Please explain this @LukeShaw *laughing emoji*".

Shaw replied to the tweet on Sunday and put: "I always do it *laughing emoji* maybe first time camera has caught me".

United followed up their Europa League triumph by claiming a 3-1 win away at Aston Villa on Sunday.

They got off to the worst start possible in the West Midlands, with Bertrand Traore's superb strike firing the hosts in front after 24 minutes.

However, after the break goals from Bruno Fernandes, Mason Greenwood and Cavani saw the Red Devils complete a stunning second-half comeback.

After the win, Shaw said: "Going 1-0 down in the first half we knew it was going to be a hard game and we have been in this situation so many times — second half we came back much better.

"That's a positive but we need to start the first half better than we normally do. Maybe we're not ready for the game but we have the quality and can't keep counting on second-half performances.

"He [Solskjaer] said exactly what I have just said, we have been in this situation a lot of times, we have the quality, are a fit team and we always believe. When we got the first goal I felt we were going to win."