The Hatters went close first as Glen Rea fired over the crossbar from 22 yards, before Tyrese Campbell saw a shot deflect narrowly wide at the other end.

Elliot Lee was inches away from putting Luton in front after 15 minutes as he broke the offside trap to collect Luke Berry’s excellent pass, but, racing through, he could only shoot into the side-netting from a tight angle.

Danny Hylton’s attempt was deflected behind, while he also diverted Sonny Bradley’s header from a corner into the gloves of goalkeeper Adam Davies. 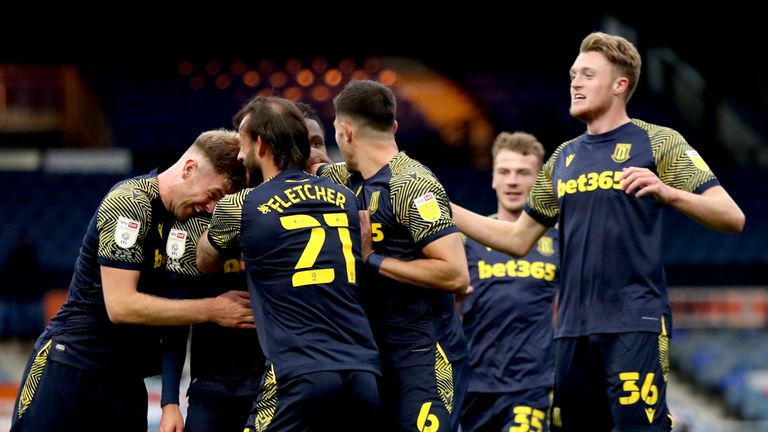 Visiting forward Steven Fletcher went close at the wrong end, almost sliding Berry’s low free-kick past his own ‘keeper at the near post.

Pelly-Ruddock Mpanzu flashed a fierce cross-shot off target and full-back Rhys Norrington-Davies, who made his senior debut for Wales in midweek, had a go but his effort deflected over via a defender’s boot.

Stoke took the lead just 60 seconds into the second half when Campbell produced a glorious cross from the right and Fletcher was there to head home his first goal for the club since a summer move from Sheffield Wednesday.

Rea had another go, slicing into the empty stands again from the edge of the box as Bradley’s downward header from Berry’s free-kick bounced up for Davies.

City then took what looked to be an unassailable lead after 55 minutes as Luton failed to clear their lines from a corner and Nick Powell was left unmarked to smash home from close range.

Matty Pearson sent a half-volley over as Luton tried to get themselves back into the game.

Joe Morrell came on for his debut midway through the second period and he sent Harry Cornick away but the forward was denied by Davies’ outstretched hand.

Rea put a header from a corner too close to Davies, while Fletcher looked for his second but fired wide on the volley.

Morrell’s shot from outside the box forced the now overworked City ‘keeper into a routine stop as Luton just could not get a goal back to force a grandstand finish.

It was Stoke who almost had a third when Sam Clucas powered through but was unable to beat Simon Sluga and Tommy Smith hammered the rebound over.

Mpanzu saw Davies once again to the rescue, deflecting his 20-yard effort behind, while Luton stopper Sluga was also foiled by his opposite number when up for a corner in stoppage time.