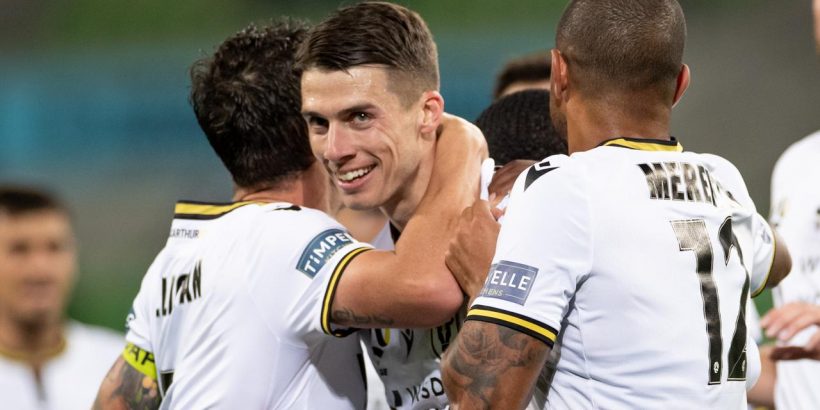 The new boys of the A-League, Macarthur Bulls, are closing in on a finals appearance in their inaugural season after a 3-1 win over a gallant Melbourne Victory at Campbelltown Stadium that catapults them up to second spot on the table.

In a remarkably tight finals race that has nine teams battling it out for the five vacant spots, Macarthur has now moved two points clear in second with four games to go, courtesy of a double from former Premier League striker Matt Derbyshire, who sits clear in second behind Jamie Maclaren in the golden boot standings with 13 strikes.

The Victory, meanwhile, have lost three games in a row and fifteen all up for the season and remain embroiled in an unenviable battle with Newcastle to avoid the club’s first wooden spoon.

Macarthur’s win is their second in a week over a Victory side who had several big chances late, but some excellent defensive work from Mark Milligan and shot-stopping from Adam Federici kept them at bay.

“For a team that prides itself on its possession and passing game we gave the ball away cheaply. There was a little bit of tension out there, we defended well but we invited pressure on ourself way too much in the second half,” said Bulls boss Ante Milicic.

“We’ve put ourselves in a position where we don’t need to rely on others (to make the finals) everything is in our hands,” he continued.

Derbyshire would capitalise on a horrible blunder from Dylan Ryan after just four minutes for his first of the evening, as he waltzed in on goal following a slip from the Olyroos defender and clipped it over Matt Acton.

“We’re giving ourselves a lot to do, give credit to the players at least their having a massive go but we can’t give ourselves that mountain to climb,” Victory coach Steve Kean said.

For the second week in a row, defender James Meredith would prove a Victory nemesis as he broke forward to power a header home from a Jake McGing cross and make it 2-0 for the Bulls before halftime.

Elvis Kamsoba’s goal, following in from a Federici save in the 78th minute, made it back-to-back strikes for him and while it was deserved for Melbourne on the balance of play, it proved to be merely a consolation.

As Melbourne pushed forward in search of an equaliser, Derbyshire added his second for the night, calmly finishing off a Macarthur counter attack and ultimately, Victory’s hopes of a result.

Macarthur led from the fourth minute and didn’t look back. (Photo by Matt King/Getty Images)Source:Getty Images

NO RESPONSE FROM RUDY

Last week, Macarthur skipper Mark Milligan was caught on camera questioning whether glamour Victory recruit Rudy Gestede was the worst striker to wear the club’s shirt, so it was always going to be interesting watching them go head-to-head again. A minute in, Milligan intervened to prevent a tap in for the Premier League marksman before Adam Federici made a special save to keep him goalless.

He was one of the Socceroos finest performers before injuries started to take their toll and whenever Robbie Kruse looks like he’s getting some continuity into his game, they seem to hit again. An ankle problem forced the 32-year-old off in this one after just 24 minutes, robbing the Victory of one of their more dangerous avenues to goal.