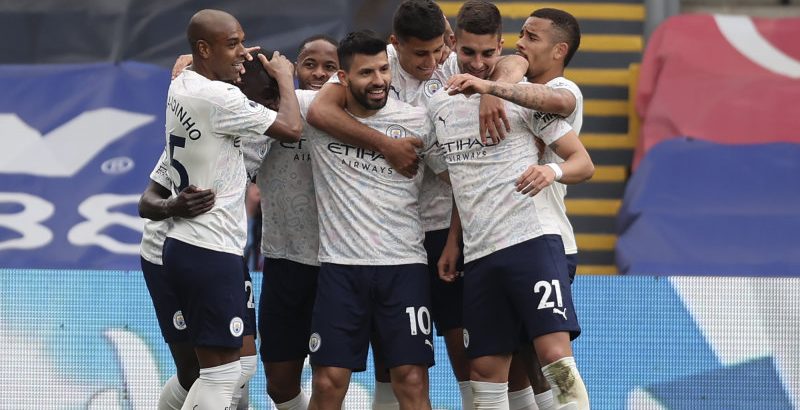 Manchester City are on the brink of a third Premier League title in four seasons after a 2-0 win at Crystal Palace on Saturday secured with goals by Sergio Aguero and Ferran Torres. 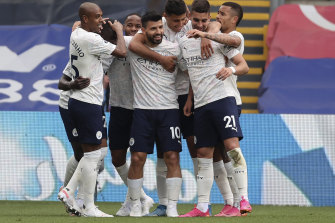 Sergio Ageuro is congratulated by his City teammates after scoring.Credit:Getty Images

Everton’s hopes of qualifying for Europe suffered a blow as they went down 2-1 at home to Aston Villa.

City scored twice in 83 seconds in the second half to notch an 11th successive away league win and will be confirmed as champions if Liverpool win at Manchester United on Sunday.

Pep Guardiola’s side have 80 points with four games left, while second-placed United are on 67 with five to play.

Leicester City, who drew 1-1 with 10-man Southampton on Friday, are third on 63 points. Fourth-placed Chelsea have 61, six ahead of West Ham United who travel to Burnley on Monday.

“We can start to put the champagne in the fridge – not to open yet but to think about it,” said Guardiola, whose side faces Paris Saint-Germain on Tuesday in the home leg of their Champions League semi-final with a 2-1 lead.

“The Premier League is already there – it is in our hands. We need one more victory, two more points.”

Chelsea, who like City face a massive week with a Champions League semi-final return against Real Madrid after a 1-1 draw away, had a Kai Havertz double to thank for beating Fulham.

Germany forward Havertz. who has struggled to justify his £71 million pounds ($127 million) price tag from Bayer Leverkusen, doubled his Premier League tally in the game against Fulham. 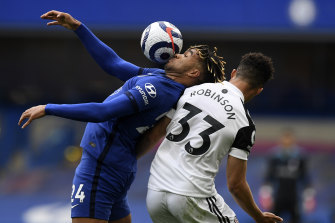 “Kai played double striker with Timo [Werner] and the two had a good connection and were always dangerous,” Chelsea boss Thomas Tuchel said. “We need him spot on to achieve our goals.”

Fulham are nine points behind fourth-bottom Newcastle United after a fifth defeat in six matches although manager Scott Parker refused to admit staying up was a lost cause.

“I understand from the outside people will laugh and think I’m crazy, but there’s no other option for me,” he said.

“While it’s the case that we can [survive], that’s our main focus from now until the end.”

Brighton breathed a sigh of relief as they moved 10 points clear of the drop zone by beating Leeds on the south-coast.

Pascal Gross converted a penalty in the 14th minute and Danny Welbeck sealed the win with a late goal that lifted Brighton to 14th in the standings.

“It was one of our best performances. You have to match Leeds for their effort and honesty and I felt we did that really well,” Brighton manager Graham Potter said.

Everton have won one of their last 10 home league games and that looks like it could cost them a European place.