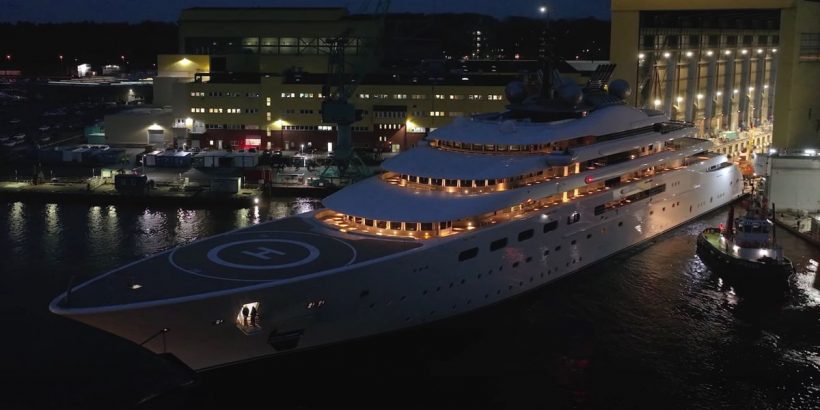 With an estimated net worth of £17billion, the deputy prime minster of the United Arab Emirates wouldn't have been too bothered in splashing out £500million on Lurssen Yachts' 160m creation fittingly dubbed BLUE.

As well as a swimming platform, nightclub and two helipads, the ship can play host to 48 guests across 40 cabins while employing 80 members of staff to keep things running smoothly.

Lurssen are one of the leading builders of luxury superyachts and have a length history having been founded way back in 1875.

The 15,320-tonne vessel, which can travel at speeds of 19 knots or 21.8mph, has an engine that is part diesel and part electric while producing drinking water with it's own waste water treatment plant.

Other features include a beauty salon, sauna, gym, deck jacuzzi as well as wifi and air conditioning and a lift for easily movement across floors.

Will Manchester City dominate the Premier League for years to come? Give us your thoughts in the comments section below. Managing partner Peter Lurssen has said of the project: "To execute such a comprehensive project, an excellent team is necessary.

"In this case, the team consisted of the owner's technical project management team, the design team from Terence Disdale who are responsible for the contemporary exterior and the traditional fresh interior design and of course, Lurssen's own project team."

With a full tank of petrol will cost Mansour in the region of £500,000, the purchase cost as reported by SuperYachtFan was more than double the £210m that was paid for City back in 2008 through the Abu Dhabi United Group.

The 51-year-old already owns the more modest 483ft A+ yacht which was built by the same manufacturers back in 2012 with Lurssen building three of the top seven biggest ever.

Lurssen adds: "We are very proud of Blue as yet another statement of Lurssen's ability and desire to build yachts that meet all of our exacting owners' requirements.

"Guided by our core focus of expert engineering, beautiful design and being a proud market leader in developing sustainable technologies."