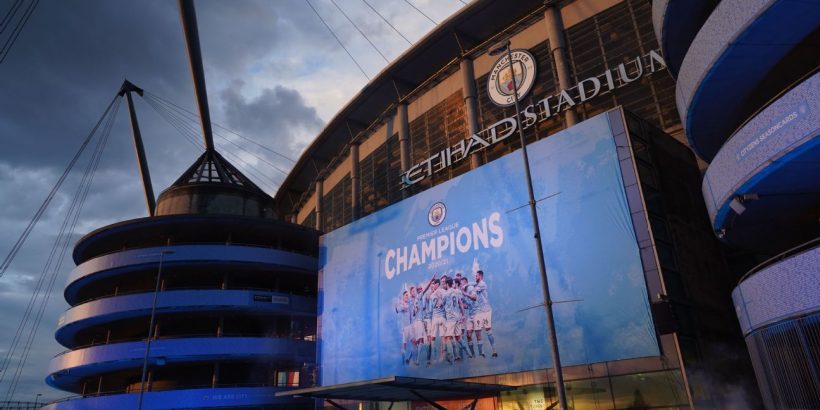 Pep Guardiola was always likely to change the landscape of English football when he arrived at Manchester City in 2016, but five years on, the Spaniard and his players have ripped up the record books and the rulebook by becoming the dominant force in the Premier League and their latest title triumph — a third in four seasons — confirms they belong in the pantheon.

This season’s league title is the fifth in nine years for City, with two FA Cups and six EFL Cups also added to their roll of honour since the 2008 arrival of owner Sheikh Mansour bin Zayed al Nahyan. But this time, they have been crowned champions while breaking the unwritten rules of doing it without a 20-goal striker and also finishing on top having made the club’s worst start to a season in more than a decade.

Everything usually needs to be perfect for a team to win a title, but City have done it by ticking only a few of the boxes that had long been regarded as crucial elements of a championship-winning team. Yet doing it this way is pure Guardiola. Why follow convention when you can do it better by proving to everyone that the old rules no longer apply?

If City win the Champions League for the first time when they face Chelsea in the final on May 29, the manner of their Premier League title triumph will inevitably be overlooked due to their long wait for European glory. But while this title success lacks the record-breaking feel of previous ones, it may ultimately prove to be the most significant because of where it puts Guardiola’s side among the greats.

City had already carved out their own history by becoming the first, and only, Premier League champions to amass 100 points when winning the title in 2017-18. That year also saw them seal the title with the biggest winning margin — 19 points — eclipsing the 18-point gap achieved by Manchester United in 1999-2000.

A year later, Guardiola and his team achieved a domestic treble, becoming the first team in English football history to complete a clean sweep in one season, but this year’s title is the one that seals City’s status as a side that can now measure itself alongside the great Liverpool team of the 1970s and 1980s and Sir Alex Ferguson’s United side of the 1990s and 2000s.

Liverpool won 10 league titles and four European Cups (UCL) between 1976 and 1990, while Ferguson’s United amassed 13 titles and two European Cups between 1993 and 2013. They are the two periods of dominance that set those clubs apart in the history of the English game, but a fifth title in nine years means that City now have their own era.

How they did it this time around

When it comes to those “boxes” that every champion must tick on their way to glory, City have covered most of them this time around.

All title-winning teams need an outstanding goalkeeper: go back through the years and you won’t find a champion with an error-prone No. 1, and City have arguably the world’s best in Ederson. The Brazilian is on course to win the Golden Glove award for most clean sheets (he has 18 in the league so far this season), but he is much more than the guy who keeps the ball out of the net. His ability to turn defence into attack with his incredible distribution sets him apart from the rest, and there have been several occasions this season when a long, pinpoint clearance by Ederson has created a goal at the other end of the pitch seconds later.

Another crucial component of a title-winning side is a solid defence, marshalled by at least one commanding centre-half. Virgil van Dijk was Liverpool’s defensive rock last season, and over the years the likes of John Terry, Rio Ferdinand, Nemanja Vidic, Vincent Kompany and Sol Campbell have performed similar roles for their teams. This season, City have had two, in Ruben Dias and John Stones, with Aymeric Laporte perhaps the best backup central defender in the Premier League.

Since forming their partnership in the wake of the 2-0 defeat at Tottenham Hotspur last November, which left City languishing in 11th position in the table, Dias and Stones have been the cornerstone of the team’s defensive solidity. City had conceded 11 goals in eight league games by that stage, but they’ve allowed just 15 in 27 since. Dias and Stones have been at the heart of the defence for the vast majority of the games that followed.

Dias, a club-record £64.3 million signing from Benfica last summer, has been a transformative figure at the back. Having failed to replace former captain Kompany 12 months earlier once the Belgian was appointed as player coach at Anderlecht, Dias arrived to little fanfare, but his impact has been immeasurable. The 23-year-old has brought consistency, reliability and a physical presence to the City team, but he has also enabled Stones to revitalise a career that had stalled to the point where it seemed his time at City was coming to an end. Dias and Stones have formed a partnership that could rival the great Premier League defensive duos of Ferdinand-Vidic and Terry-Ricardo Carvalho in the years to come.

Goals from midfield is another key element for any top team — think of Frank Lampard’s contribution at Chelsea or the goals of Paul Scholes and David Beckham when United were collecting titles on a regular basis. This season, 28 of City’s 71 league goals have been scored by midfielders, with Ilkay Gundogan (12) leading the way from Phil Foden (7) and Kevin De Bruyne (5). Only Fernandinho, whose defensive contributions in front of Dias and Stones have been immense, has failed to score among Guardiola’s regular midfielders.

Guardiola has always been bold enough to defy convention when it comes to deploying players in numerous positions. Aside from using Foden, De Bruyne, Bernardo Silva and Raheem Sterling as false nines this season, Guardiola has played Joao Cancelo at left-back and right-back, and has seen Gundogan thrive in both attacking midfield and a defensive role. He has even joked about allowing Ederson to take the team’s penalties.

It is further forward, though, where City have truly defied convention.

The history of Premier League champions is littered with legendary strikers doing the heavy lifting with their goals, particularly in key games. Thierry Henry, Alan Shearer, Mohamed Salah, Didier Drogba, Sergio Aguero and Cristiano Ronaldo have all hit 20 or more league goals to help fire their teams to a Premier League title over the years, but this season, neither of City’s recognised strikers — Aguero and Gabriel Jesus — has even managed double figures.

Jesus has just eight goals in 25 appearances while Aguero, sidelined by injury and COVID-19 at times this season, has scored twice in 11 games. But City have cruised to the title without an out-and-out striker, often playing with Foden or Bernardo as a false nine. Riyad Mahrez (9) and Sterling (10) have both outscored Aguero and Jesus this season, but none of City’s forwards has been prolific.

Despite their unusually low return of goals from their strikers, City have still outscored every other team and established a double-digit lead over second-placed United with two games remaining. They have been ruthlessly efficient, winning 27 out of 28 games in all competitions between mid-December and early-April, and doing so without ever really needing to hit top gear.

There have been few dramatic fightbacks or wins against the odds, no defining game or moment which encapsulates their league season.

It has been like watching a long-distance runner moving through the field after a slow start to eventually win at a canter, which also fits City’s steady movement towards the same status as the great Liverpool and United sides. By the time they were winning titles with unerring regularity, they didn’t have to reach the heights to do it. Winning had become second nature, something that could be achieved on autopilot, and that is the story of City’s latest title success.