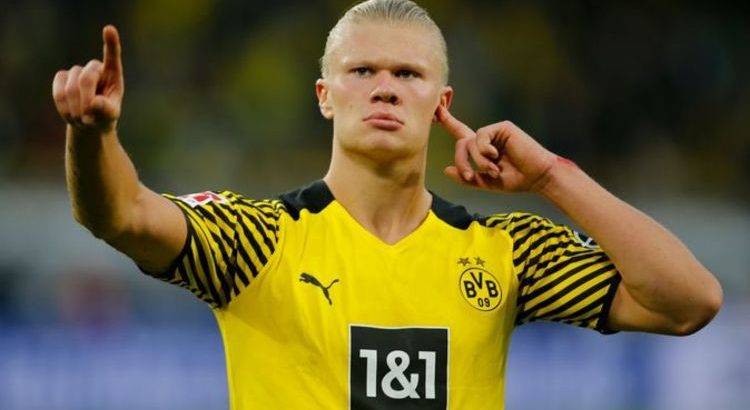 Erling Haaland: All you need to know about Norwegian star

Manchester United and Manchester City have received a boost in their pursuit of Erling Haaland after comments from Barcelona vice-president Rafael Yuste. The striker is expected to leave Borussia Dortmund in next summer’s transfer window when his £68million release clause becomes active.

United and City are expected to be in the running to sign Haaland, with the Premier League rivals both in need of a top-class centre-forward.

Ole Gunnar Solskjaer’s side are expected to make a striker one of their top priorities despite signing Cristiano Ronaldo this summer, having previously been interested in Haaland before he joined Dortmund from Red Bull Salzurg.

And City’s recent defeat to Paris Saint-Germain showed their need for a clinical marksman after they missed out on Harry Kane, with Pep Guardiola’s side dominating their French opponents but failing to finish off a raft of chances.

They are expected to be joined by Europe’s top clubs in the race to sign Haaland, and while Yuste said Barcelona would be keen on the 21-year-old, he admitted it would be difficult for the La Liga giants to finance a move.

“Between now and next year we will see what the situation is and what we can count on for signings,” he said in an interview with Mundo Deportivo.

“First you have to lay the foundations of a house that we have found in ruins, so let’s focus first on fortifying it, first feed the household and then we’ll see what we can do.

“Without losing sight of the fact that we always want to have the best, and Haaland, he is one of the best in the world.”

Any club trying to sign Haaland will likely have to negotiate huge wage demands from his agent Mino Raiola.

Asked if the agent’s demands would suit Barca, Yuste said: “No.

“The president and the CEO said it, that in the previous term, which I also reiterate that it has been disastrous, they bought players without knowing if they could pay and that all they did was increase the debt, in addition to finding us the mass salary that we have encountered.”

Barca’s huge wage bill led to them being unable to ratify a new contract for Lionel Messi this summer, resulting in the 34-year-old joining Paris Saint-Germain on a free transfer.

PSG could also be keen on signing Haaland next year, especially if they lose Kylian Mbappe to Real Madrid.

But Juventus and Inter Milan appear unlikely to be in the running after Beppe Marotta said Italian clubs have “no chance” of signing him.

Inter’s CEO was in charge at Juventus when the Turin giants tried to sign Haaland from Norwegian club Molde in 2019.

“One of my biggest regrets was a deal for Haaland,” Marotta said. “I was CEO at Juventus and we had the opportunity to sign him for €2million from Molde.

“We were close. Now it is impossible to see Haaland playing in Serie A. Italian clubs have absolutely no chance of signing him next summer.”