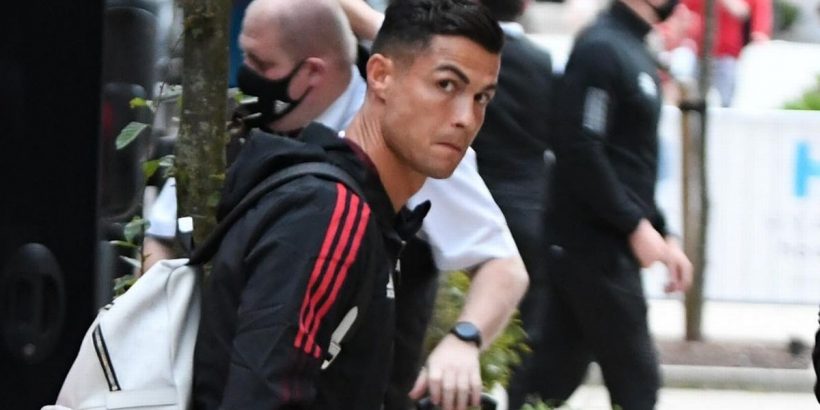 Cristiano Ronaldo and co were pictured arriving at the Hyatt Hotel on Friday ahead of Manchester United's clash with Newcastle at Old Trafford.

Ronaldo is in line to make his second United debut against the Magpies on Saturday, having secured a shock return to the club on the penultimate day of the summer transfer window.

Ole Gunnar Solskjaer has confirmed the 36-year-old will feature at some point in the game, although he did not disclose whether that will be from the start or off the bench.

The day before his potential bow Ronaldo was spotted arriving at United's pre-match base, the Hyatt Hotel, along with his new team-mates.

It is believed around 10-15 supporters flocked to the hotel to greet their returning hero as he stepped off the team bus.

The likes of Raphael Varane, Paul Pogba and Nemanja Matic were also pictured rocking up at the hotel.

But it is Ronaldo who dominates the headlines before what promises to be a special afternoon at Old Trafford.

Do you think Cristiano Ronaldo will start against Newcastle? Let us know in the comments section below. The Portugal captain will be making his first United appearance for 12 years, returning to the club with a legacy as one of the greatest players in football history already secure.

He added another four Champions League titles and as many Ballon d'Or awards to his collection in his legendary stint at Real Madrid, having already picked up both with United.

Ronaldo produced a sensational return of 450 goals in 438 games for Los Blancos before heading to Juventus, where he bagged 101 goals in 134 games and clinched two Italian titles.

Solskjaer has been impressed with his early performances in training, saying at his pre-match press conference: "He's been good. Of course, we've followed his career from afar since he left here. I think everyone's very, very happy to have him back.

"He can speak for himself but he seems happy to be back as well. The mood's been very good, working well and we're looking forward to Saturday.

"He's been having a good pre-season with Juventus, he's played for the national team, he's had a good week with us here. He'll definitely be on the pitch at some point, that's for sure."