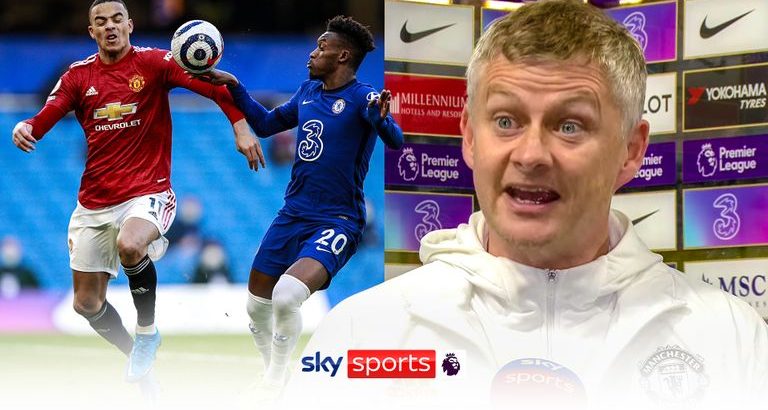 Ole Gunnar Solskjaer took aim at the officials for “taking two points away” from his Man Utd side in their draw at Chelsea, who he criticised for “influencing” referees.

Despite VAR advising referee Stuart Attwell to watch a replay of an incident in which Chelsea winger Callum Hudson-Odoi appeared to handle the ball in the box, Attwell opted to stick with his original on-field decision of a free-kick for Chelsea during their 0-0 draw at Stamford Bridge.

Asked if he thought his side should have been given a penalty, Solskjaer told Sky Sports: “Yep, 100 per cent. They’re shouting it’s handball for our player, but when you look at it on the video, it’s taken two points away from us.”

There was further controversy immediately after the game when United full-back Luke Shaw claimed Attwell had told United captain Harry Maguire he declined to award a penalty because of the furore it would cause.

“I can’t say, because that’s not going to be good for him,” Solskjaer replied, when asked about those claims. “I didn’t say it, I don’t want to cause controversy.”

United were similarly aggrieved a week ago after their draw at West Brom when Maguire was denied a penalty and said afterwards, “ever since other people from other teams spoke about us, we’ve had absolutely nothing from the referee or VAR.”

It was a theme picked up by Solskjaer.

“It’s not right, is it?” he said. “It’s all these outside influences, even the VAR talk before the game here on Harry, when they put that on the website, that’s cheeky. It’s influencing referees. You can go back and look at the website. It’s putting pressure on the referees to give penalties against us.

“We’ve seen, there was a manager – was it Frank? [Lampard] – there’s loads of talk about us getting penalties, when there is no doubt whatsoever. Now we should’ve had one, that’s clear to this.”

While Maguire’s remarks last week were interpreted as being a response to Jurgen Klopp, who said last month “Man United have had more penalties in two years than I had in five-and-a half years”, Solskjaer also complained after United’s FA Cup semi-final defeat to Chelsea in July that “it seemed that little bit of influencing the officials worked.”

The manager’s latest frustration appeared to stem from a match preview on the Chelsea website, which highlighted that Maguire had been given reprieves against penalty and red card checks by VAR in recent games between the two sides. 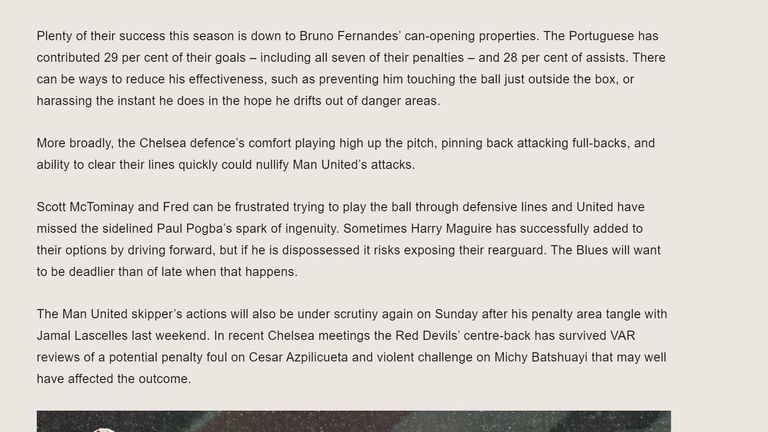 Solskjaer pointed to United’s late attacking intent to show how he had attempted to push his side on and keep alive their faint hopes of chasing Manchester City down in the Premier League title race.

He admitted United had needed more than a point against Chelsea as their poor scoring record against top-six opposition continued, with their only goal coming in the second minute of their first game – a 6-1 thrashing by Tottenham in October.

“It’s not enough,” he conceded. “That’s why towards the end, you’re pushing players forward, trying to get that winning goal, we hoped for, but a clean sheet is always the foundation. 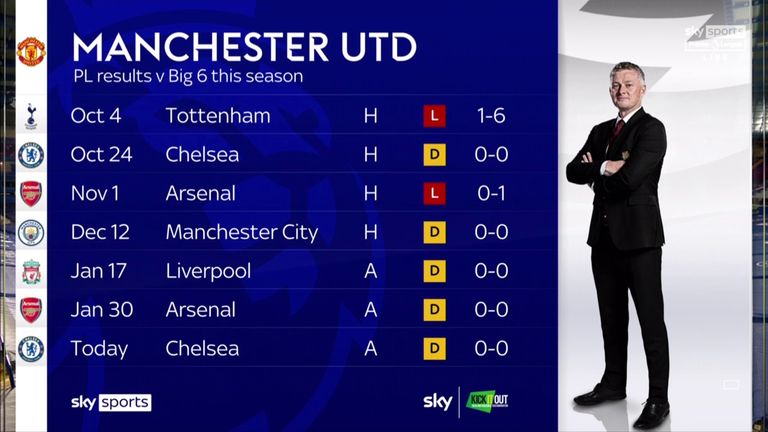 “We’ve had loads of clean sheets against the top sides, but haven’t found a goal and that’s what we need to find. I’ve said it before, we need that one goal to open it up.”

Tuchel: VAR review was not needed for penalty

Chelsea manager Thomas Tuchel saw the decision in favour of Hudson-Odoi differently – and felt a VAR review, which appeared to stifle the Blues’ early momentum, was excessive.

“How can it be an intervention?” he told Sky Sports. “The player in red plays the ball with the hand, and then we’re checking for a penalty? Why does the referee have to see it?

“You watch it for one second on the iPad. Why does the referee need to see it? He did everything right, I don’t understand why he needs to check it. I’m glad it’s not a penalty, that would be even worse.”

Tuchel was more impressed with his side’s performance without the ball than with it as they missed the chance to move above West Ham and into the final Champions League spot, but sensed promising signs as he stretched his unbeaten start as head coach to nine games since joining last month.

He added: “We take what we got. We have a good performance, defensive-wise, character-wise, and from mentality, I am absolutely happy against a team like Manchester United. You don’t get many chances. If you do, a half-chance must be enough.

“We’re not in that moment where we are clinical enough to win games like this. But with the effort and performance, absolutely no concerns. If we go on like this, we are a difficult team to play against.”

Sky Sports pundit and former Premier League manager Graeme Souness felt Solskjaer’s anger to the television cameras acted as a distraction to avoid focus on another goal-shy performance from his Manchester United side.

Five of United’s seven Premier League games against big-six opposition have ended in 0-0 stalemates this season – and they have lost both of the other two meetings.

“It’s a bit of distraction,” he said. “Whether you think it was or it wasn’t [a penalty], we are talking about two of the best teams in English football coming together and none of the special players turned up.

“I think it’s a message that Manchester United are accepting second. They never chased the game and if you really believed you had a chance of catching Manchester City, like Sir Alex Ferguson would have done, they would have loaded the pitch with every attacking player they had. I think that tells you how United see it going forward.

“If you are at a big club today and you lose one game, everything is wrong. You get criticism until the next game. The roof caves in – I’ve experienced that myself when you think you’ve got it going well, you lose one game and all of a sudden, nothing you are doing is right and you are questioned on everything.”