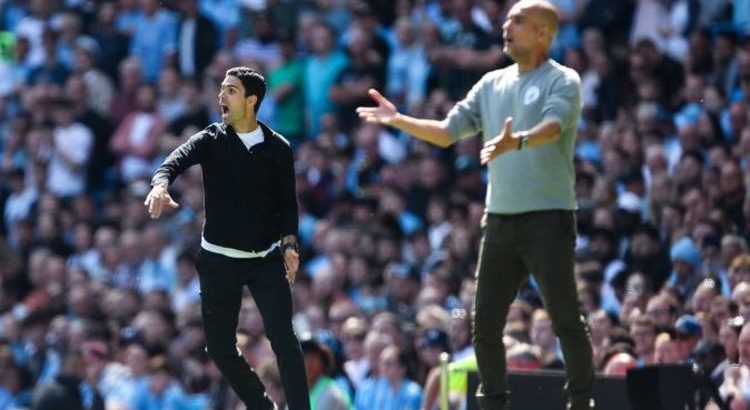 Arsenal were thrashed 5-0 by Manchester City at the Etihad Stadium on Saturday, but Manchester United boss Ole Gunnar Solskjaer picked up on one of Arsenal’s major problem’s last season when his side faced the Gunners.

Arsenal were thrashed 5-0 by Manchester City on Saturday as Mikel Arteta’s side deservedly plummeted to the bottom of the Premier League following the lunchtime game.

The Gunners were woeful but weren’t helped by Granit Xhaka’s first half red card as Arsenal’s worst ever start to a top-flight season in their 118-year history got considerably worse.

Arteta’s side have now conceded nine goals in their opening three games without scoring a single goal themselves, as their fragile defence was exposed once again.

Their defensive issues aren’t new concerns however, as Ole Gunnar Solskjaer spotted a major problem in the Arsenal backline when they faced Manchester United last season.

During Arsenal’s 0-0 draw against United last campaign, Solskjaer was wise to the lack of defensive quality from Cedric Soares, although the Norwegian’s side couldn’t break them down on the day.

According to The Athletic, during the match Solskjaer went to the touchline and beckoned over Marcus Rashford, telling him that Cedric “cannot defend”, which was clear to see during Arsenal’s defeat to City.

Arteta fielded an extremely weak backline on Saturday, with Pablo Mari dropped and £50million signing Ben White out ill, and they were made to pay by a free scoring City side who have now scored five in back-to-back home games in the league.

Arsenal’s technical director Edu has been heavily criticised by Arsenal fans for his poor recruitment and the Brazilian has spent £300m on players since his arrival in July 2019, splashing out £135m during this summer’s transfer window.

Cedric was signed initially on loan by the Gunners on deadline day in January 2020 and was rewarded with a long-term permanent deal the following summer, but the deal hasn’t been a successful one.

The Portuguese full-back starred for Southampton after joining the side in 2015, and quickly became one of the top full-backs in the league, validated as he was included in Portugal’s Euro 2016 winning squad.

However, Cedric’s form dipped towards the end of his Southampton career, and Inter Milan took a punt and loaned him for a season in 2019.

The deal included an option to buy for £9.5m, but the Italian side passed on the opportunity, which should’ve been seen as a major sign before Arsenal signed the defender.

Edu has come under lots of pressure for signing players that seem to be beyond their best days, and Willian is another example after Arsenal gave the Brazilian a bumper contract when Chelsea released the winger.

It sends out a bad message on the club’s behalf, signing players that are deemed surplus to requirement’s by teams performing at a higher level, and Arsenal are in need of a serious rebuild, despite spending £135m already.

Willian is amongst the club’s highest earners but has barely made an impact since arriving from Chelsea, and Cedric remains a heavy liability in the Arsenal defence.

Arteta has the upcoming international break to save his job and rethink his plans for the next Premier League game, but time is running out for the Gunners boss.