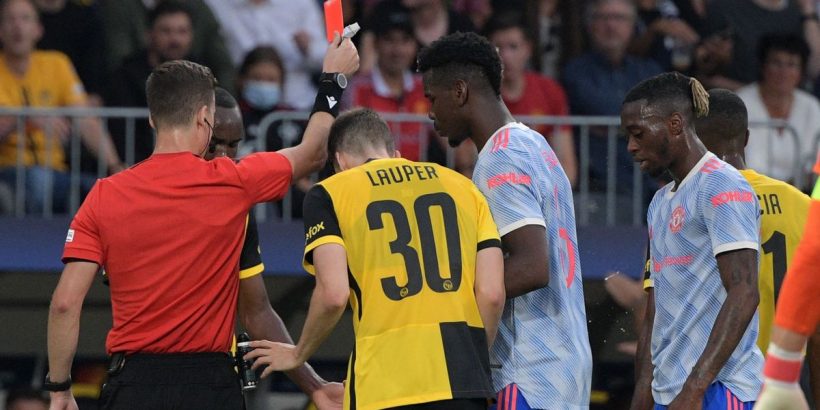 The Red Devils' Champions League campaign got off to a poor start on Tuesday evening.

Ole Gunnar Solskjaer's men took the lead in the first half when Bruno Fernandes delivered a lovely ball to Cristiano Ronaldo, who turned it home.

However, after Wan Bissaka's red card, the Swiss side grew into the game, and two second-half goals turned the game on its head.

And L'Equipe infamously tough ratings didn't hold back in their assessment of the two United players.

Wan-Bissaka saw red in the first half when he overreached for a ball after a wayward touch, and he caught Christopher Martins above the ankle.

Martins immediately fell to the floor in pain.

"He causes his own problem with his really clumsy touch. The tackle is awkward, I don’t think he’s done it on purpose, a little accidental, and he goes over the top, and unfortunately, he has to go," Scholes admitted in the BT Sport studio after the game.

"In our time, that wasn’t a red card. You get a pat on the back for making contact," Rio Ferdinand hit back.

Did you think Wan Bissaka deserved a red card? Let us know in the comments section.

Sancho was the second player to be awarded a zero rating by the French outlet.

Solskjaer hooked Sancho in the wake of Wan-Bissaka's red card as he brought on Diogo Dalot for more defensive cover.

However, Sancho had failed to make an impact on the game up until that point.

When he left the field, in the 35th minute, the United winger had failed to register a single key pass or a successful dribble.

L'Equipe labelled the performance a 'waltz of blunders', and United's highest ratings were Ronaldo and Fernandes who both managed a six.

Donny van de Beek was the lowest rating, aside from the two zeroes, with a three, and the squad managed a 4.5 average.