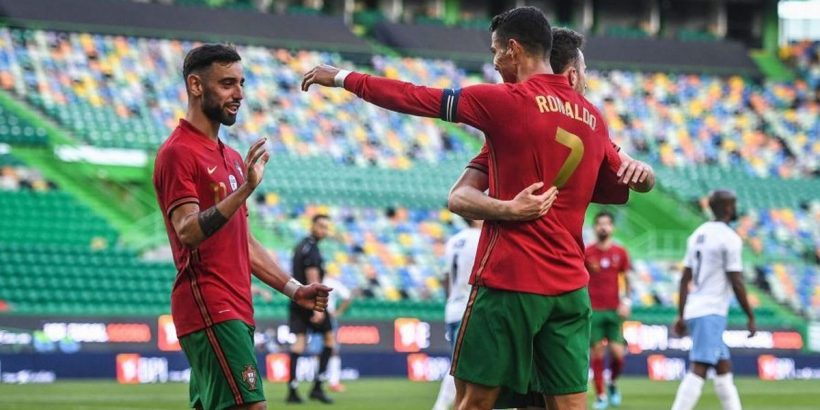 Many Manchester United fans are hoping they caught a glimpse of the future on Wednesday after witnessing Bruno Fernandes tee up transfer target Cristiano Ronaldo on international duty.

Portugal are making their final preparations before opening their Euro 2020 campaign against Group F opponents Hungary on June 15.

Fernando Santos’ side beat Israel 4-0 in their final warm-up fixture ahead of the summer tournament, where both Fernandes (two) and Ronaldo managed to get on the score sheet.

Fernandes bulldozed his team into the lead after getting on the end of a Joao Cancelo cross.

The United talisman then turned supplier as he assisted Ronaldo for a straightforward second at the Estadio Jose Alvalade in Lisbon.

Supporters paid tribute to the double act as one Twitter user posted an image of Ronaldo and Fernandes celebrating, writing: “This Bruno – Ronaldo link up is all United fans wish to see.”

Manchester City full-back Cancelo joined in on the act and scored Portugal's third before Fernandes collected a second in injury time.

Rumours have intensified regarding Ronaldo’s potential move back to Manchester this summer, with his Juventus future in doubt after Andrea Pirlo was fired by the club.

Do you think Manchester United should pursue Cristiano Ronaldo this summer? Let us know in the comments section.

Massimiliano Allegri has since resumed his old role as manager of the Old Lady, with Ronaldo reportedly reaching out to United and Paris Saint-Germain ahead of a potential exit.

The five-time Ballon d’Or winner joined the Red Devils in 2003 and scored 118 goals in 292 appearances for the club before he left for Real Madrid six years later.

Ronaldo, 36, has one year remaining on his contract with the Bianconeri, who could look to cash in following a hugely disappointing fourth-place finish in Serie A. Whereas he was once the poster boy at Old Trafford, compatriot Fernandes—who also joined United directly from Sporting CP—has quickly risen to become the new fan favourite.

The 26-year-old has scored 40 goals and recorded another 25 assists in 80 appearances for United so far, though the club is still yet to lift a major trophy under Ole Gunnar Solskjaer.

The return of Ronaldo is one surefire way to improve the club’s chances of ending that drought, with the possibility of reviving a partnership that clearly works for their national team.