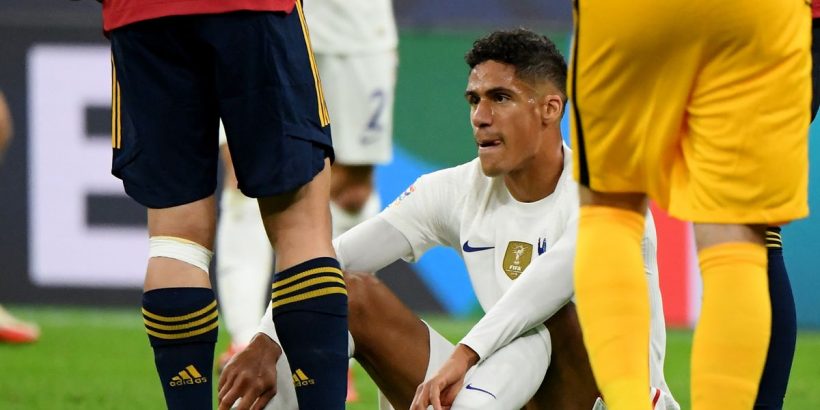 Manchester United fans have flocked to Twitter to attempt to digest the news that their summer signing Raphael Varane had sustained what appeared to be a muscle injury.

The Frenchman arrived from Real Madrid for £34million over the summer to strengthen the Red Devils’ defence and provided some much-needed experience and winning mentality in the dressing room.

But United manager Ole Gunnar Solskjaer will be sitting with his head in his hands on Sunday evening after he watched the 28-year-old hobble off of the pitch whilst playing for Les Bleus.

In the 41st minute of the Nations League final between France and Spain, Varane looked like he pulled his hamstring whilst clearing the ball and, despite receiving immediate medical treatment, was replaced by Liverpool defender Dayot Upamecano.

Masses of United fans were understandably distraught, with one saying: “F*** the international break. Varane is injured.”

Another said: “Varane is the only reason we concede one goal every three days and not three. Oh no.”

How will Manchester United cope without Raphael Varane? Have your say in the comments below.

Whilst one fan said: “Omg Varane is injured?” We are knee deep in the mud. No defence, just vibes.”

After the medical staff rushed on to the side, some supporters interpreted that as their defender sustaining an injury far worse than some are anticipating, with one explaining: “I thought that the medical staff were very concerned when I was watching it at the time. They hurried him off. He’s not the sort to go down injured at anything. It’s clearly bad.”

However, some fans tried to make light of the situation by claiming that the injury to their defender could increase the chances of Solskjaer being sacked, with one saying: “The Varane injury gets Ole sacked sooner. Every cloud and that.”

To make matters worse for United fans, captain Harry Maguire is also sidelined with an injury that he sustained in their match with Aston Villa before the international break.

It is unknown as to whether the 28-year-old will be back before United’s clash with Leicester after the restart, which leaves out of favour defenders Eric Bailly and Victor Lindelof to fill in until the usual centre-back partnership returns.