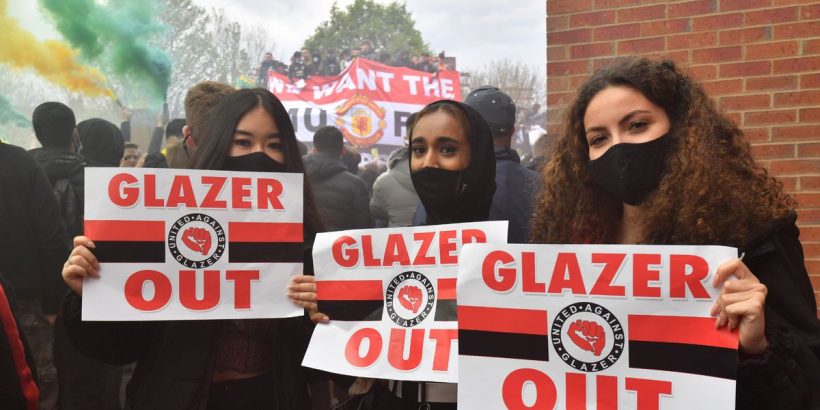 Manchester United fans have taken their protests online as they have launched angry reviews against new kit sponsor TeamViewer and promise to boycott other United sponsors as well.

A few hundred United supporters stormed the club's Old Trafford pitch on Sunday that led to a postponement of the Liverpool game in a defiant revolt against the Glazer ownership.

The American family have controlled the club since 2005 with fans growing tired of increasing debts. They turned their frustrations towards sponsors on Tuesday in a public letter.

“As commercial partners of the Glazer family you are legitimate targets of the global fanbase because the combined £279million per annum you pay will not go towards investment in the squad to compete with the best clubs that United now trail,” the letter read.

“It will not go towards refurbishing Old Trafford or training facilities, both now so outdated they have become a symbol for Glazer disinterest.

Manchester United fans will boycott your products, seeks to tarnish your brands and support your competitors until you terminate your commercial partnership with the Glazer family.”

United's new kit sponsor TeamViewer was the first partner targeted as the German technology company received 1,320 complaints on review site Trustpilot, most ending with the social hashtag Glazers out.

Teamviewer, who specialises in controlling and monitoring computer software, signed a five-year deal worth £235million replacing Chevrolet on United's shirts.

TeamViewer CEO Oliver Steil said: "With Manchester United and TeamViewer, two global winning teams join forces: Together as Team United we can bring the fan experience in the legendary Theatre of Dreams to a new level."

Over on Trustpilot, fans slammed TeamViewer products with one star reviews.

The comments forced the site to say: "Although we understand you want to voice your opinion about things in the news, Trustpilot is a place for feedback based on genuine buying and service experiences."

One fan who titled his comment "green and gold until it's sold" wrote: "Lining the pockets of the parasitic Glazer family is an instant one-star."

Another said: "Who in their right mind gives money to the money grabbing @ssholes in Florida"

Ashley and others branded TeamViewer as a "virus" feeding support to a "criminal family" with the familiar hashtag glazersout.

Jason recommended that TeamViewer should: "do the honourable thing and distance themselves as far away from them as possible."

READ MORE: How Glazers’ £4bn value of Man Utd is justified and what new buyer must pay off