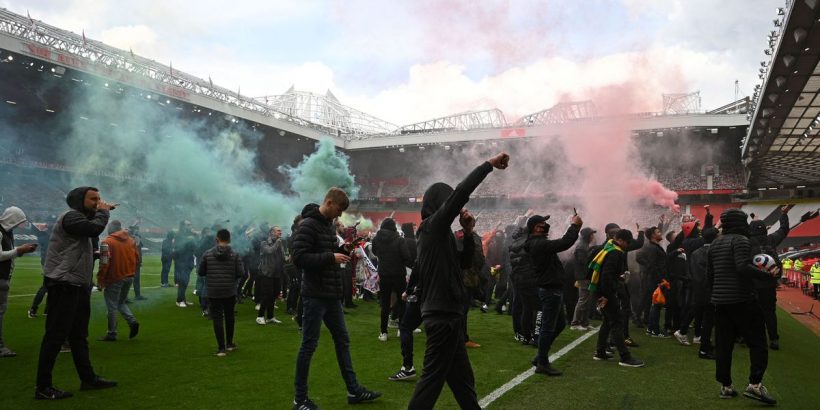 A group of approximately 200 Red Devils supporters stormed the famous turf ahead of the team's Premier League against Liverpool, with the fixture targeted for the continuation of protests against their owners the Glazers.

The protesters have since been moved out of the stadium, top-flight officials say the teams are still in their hotels and will leave when the situation is "under control".

And MEN have reported that the supporters took some souvenirs from their break-in at the 80,000-seater ground.

With Sky Sports continuing to broadcast from Old Trafford, United fans left 'rubbish and debris' as they were cleared out.

And some took 'balls, corner flags' and even 'camera equipment' before leaving the ground in an 'orderly fashion'.

The huge gathering at the ground came ahead of the planned 4:30pm kick-off, with an away win handing Manchester City the title.

After getting into the ground, they made their way to the Sky Sports broadcasting platform, chanting their desire for the Glazers to leave the club.

And one fan even aimed a flare at the TV zone, with BBC reporting that 'five or six' supporters made their way down the tunnel.

The events, which unfolded during the social media blackout, left supporters confused over how the game would be able to go ahead.

This protest has come following the fallout of United's participation in the proposed European Super League in April.

With protests taking place at the ground a day after the news, Joel Glazer issued an apology to the fans which was not well received.

And a small group of supporters managed to break into the Carrington training ground the same week, with manager Ole Gunnar Solskjaer forced to step in.

The Glazer family have owned shares in the club since 2003, becoming majority holders two years later.